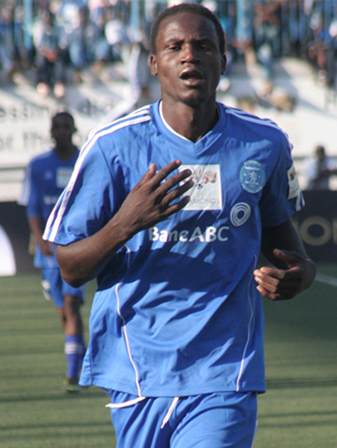 RICHARD Kawondera rose from the bench to score with three minutes remaining and push Dynamos into Chibuku Super Cup quarterfinal berth by edging visiting WhaWha in a first round match at Rufaro Stadium on Saturday.
Kawondera headed in Roderick Mutuma’s cross to break a resilient WhaWha and decide the match.
The result was also recovery for caretaker coach Tonderayi Ndiraya who was under pressure after getting off to a bad start last Sunday when he lost to Highlanders in the final of the ZNA Charity Shield.
WhaWha appeared more determined to steal the day as they contained Dynamos well and five minutes into the match they almost went ahead but Cliff Mwale poorly shot back straight to Dynamos goalkeeper Tatenda Mukuruva who had also poorly cleared an attempt at goal.
The visitors matched Dynamos pound for pound but they almost conceded when Sydney Linyama’s headed effort hit the cross bar after coming at the end of an Ocean Mushure corner kick.
Mwale had a powerful shot blocked by Linyama in the 25th minute but Dynamos responded with Takesure Chinyama’s shot fizzling just outside the upright post.
Chinyama then came face to face with WhaWha goalkeeper Philip Nhete who did well to deny him on the stroke of halftime before the visitors also attempted to hit back seconds later as Mwale was slow to strike on Mukuruwa’s shoulder.
Mutuma had a goal ruled offside three minutes after the restart as Dynamos emerged from the break as the more persistent side against a WhaWha who defended stubbornly.
Kawondera hit the post with a header off a cross by Godknows Murwira and later on he also miscued tapping in a cross from the same feeder.
Kawondera appeared forceful as he also had a grounder cleared on goal line by WhaWha centre back Gift Kwaramba five minutes from the final whistle.
The defining moment came when Kawondera got to the end of Mutuma’s cross to seal the day for Dynamos.
RESULTS & FIXTURES
Saturday: FC Platinum 2-0 Dongo (Mandava), Chapungu 2-0 Flame Lily (Ascot), Chicken Inn 2-0 Hwange (Luveve)
Sunday: Highlanders v How Mine (BF), Dynamos v Whawha (Rufaro), Caps United v ZPC Kariba (NSS), Triangle v Tsholotsho (Gibbo)