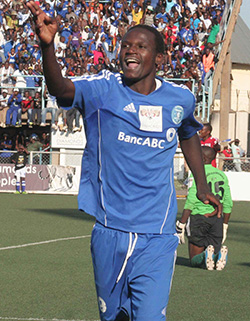 Dynamos 2-0 Chiredzi
Highlanders 0-0 Buffaloes
RODRECK Mutuma struck twice for Dynamos on his return from suspension as the defending champions opened a three-point lead at the top of the Castle Lager Premiership after beating Chiredzi while Highlanders failed to win on Wednesday.
Mutuma tucked home a Sydney Linyama rebound in the 12th minute and finished off his brace in the 55th minute against 10-man Chiredzi. Mutuma was then pulled off on the hour for DRC international Fabrice Mbimba, but he had done the job.
The defending champions had a host of chances to score even six more goals in the second half but Mbimba, Simba Sithole and the returning Ocean Mushure took turns to miss the target.
In other games Highlanders were held to a 0-0 draw by Buffaloes at Hartsfield as they missed Charles Sibanda and Pasca Manhanga through suspension.
Bosso remained second with 39 points, three off Dynamos who have 42 and only ZPC Kariba can close that gap.
Elsewhere ZPC face How Mine at Hartsfield in Bulawayo on Friday while Caps United can also leapfrog Bosso if they beat Bantu Rovers on Thursday.
Meanwhile, at Gibbo, Norman Mapeza lost his second league match after FC Platinum went down 2-0 to Triangle.
Triangle had a goal disallowed for offside early in the match for offside while Platinum lost James Marufu to injury after 24 minutes of play.
The home side were awarded a penalty in the 60th minute after Qadr Amin was adjudged to have handled in the box and Praise Tonha converted.
Tatenda Zulu then made sure of maximum points with a close range header in the 91st minute to compound Mapeza’s woes.
In his last league match, he lost 1-0 to Highlanders at Mandava Stadium.
At Ascot, Chapungu came from a goal down to preserve their unbeaten home run, scoring three times in the second half to crush Chicken Inn 3-1 at Ascot.
Ishmael Lawe struck in the 37th minute for Chicken Inn before Maxwell Mavuto drew parity for the hosts in the 77th minute.
From there, Chapungu took control and won a penalty in the 82nd minute when Passmore Bernard hacked down Gift Phiri inside the box and Charles Murisa converted from the penalty spot.
It was to get worse for Bernard as he turned the ball past his own keeper at the death for Chapugnu’s third of the afternoon.
At Rimuka, Wonder Kapinda gave Black Rhinos the lead in the 35th minute against Harare City and that turned out to be the only goal of the match.Advertisement