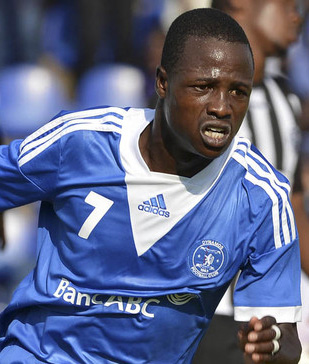 Triangle 4-0 Caps United
Highlanders 0-1 Chapungu
A FIVE minute two-goal blitz by Triangle decimated Caps United in a high tempo Castle Lager Premier Soccer League match played at Gibbo Stadium on Sunday.
After the two teams had traded blows for 30 minutes, Richard Kawondera pounced in the box to beat Victor Twaliki, in goal for Caps United.
As Caps tried to immediately hit back, they conceded a free kick on the edge of the box and Lameck Nhamo curled a sweet one into the nets to make it 2-0.
But Nhamo was not done. In the 54th minute he complete his brace with a simple tap in and, moments later, Caps assistant coach Brenna Msiska saw red after a heavy protest at the referee’s decision.
Then Felix Kuswatuka put the game to bed 18 minutes from time after a mistake by Dominic Mukandi.
At Barbourfields Stadium, Highlanders defenders were caught sleeping in the eighth minute when, instead of focusing on defending, they chose to accost the referee over a handball by a Chapungu player.
Chapungu quickly took the free kick and Allen Tavarwisa easily beat Arial Sibanda.
Highlanders had a chance to pull one back on the half hour but Godfrey Makaruse skied his effort after being fed by Bruce Kangwa.
At Gwanzura, it took 87 minutes for Dynamos to break the deadlock against Flame Lily when Dominic Chungwa poked home a Ronald Chitiyo pass for the crucial three points that kept them level on points with Triangle.
In other matches, Hwange were held to a 0-0 draw by Buffaloes.
Tsholotsho picked up three points after beating Hwahwa 2-0 at Ascot Stadium.
Lynoth Chikuhwa scored in the 20th and 58th minutes to give Iziqholo ZeZhwane their second win of the season and move them to seven points.
RESULTS
Saturday:  ZPC Kariba 1-1  Dongo Sawmill (Gwanzura), How Mine 0-0 Harare City (Luveve), FC Platinum 1-3 Chicken Inn (Mandava)
Sunday: Dynamos 1-0 Flame Lily (Gwanzura), Triangle United 4-0 Caps United (Gibbo), Highlanders 0-1 Chapungu (Barbourfields), Hwange 0-0 Buffaloes (Colliery), Whawha 0-2 Tsholotsho (Ascot)