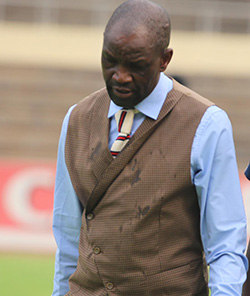 HARARE giants Dynamos’ title hopes took a heavy knock when they fell 0-2 away to surprise title contenders Ngezi Platinum in an incident filled top of the table clash played under equally blustery weather conditions at Baobab Stadium Saturday afternoon.
Dembare fans who were not able to stomach their team’s defeat twice invaded the pitch with the second incident leading to 15 minutes of match stoppage as security tried to clear the pitch.
Violent scenes among fans also added onto the ugly episodes of otherwise exciting football.
Controversy started when a Ngezi Platinum ball boy invaded the pitch during play and pocked the ball inside the net with the match still goalless.
The incident was immediately succeeded by two quick goals scored in a two-minute spell to give the Tonderayi Ndiraya-coached side a comfortable two goal advantage.
The two second half goals came courtesy of a close-range effort inside a crowded 18-yard box by nomadic star Qadr Amini and a header by Xolisani Moyo.
That incensed the travelling Dynamos faithful who invaded the pitch and forced the ball boys to retreat into the dressing room.
This opened the flood gates for fierce clashes between Ngezi and Dynamos fans on the terraces while the play continued on the pitch.
With all pointing towards their team’s defeat, hundreds of Dynamos fans started walking out of the stadium via the centre of the pitch, forcing the match stoppage and Ngezi Platinum players to run into the dugout for their safety.
The scoreboard did not shift when play resumed after 15 minutes of stoppage with only ecstatic Ngezi fans left to enjoy the remainder of the match proceedings.
Besides the acrimony displayed among fans, both sets of players were in friendly mood.
Ngezi Platinum are now the new log leaders with 60 points but lead fellow miners FC Platinum on goals difference as the two have the same number of points.
It was the first league triumph Ngezi have ever registered against their more illustrious opponents since joining top flight football a few seasons ago.
Dynamos now trail the joint log leaders with two points, having amassed 58 points with the premiership marathon now left with only four matches to play.