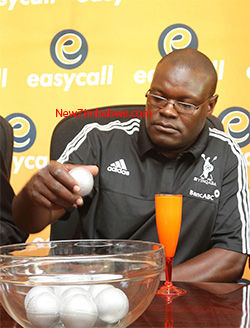 It’s the final before the final!
GIANTS Dynamos and Highlanders were drawn against each other in the 2015 EasyCall Cup semi-finals on Tuesday to set up their fifth meeting of the year.
The other semi-final will see newly crowned Castle Lager Premiership champions Chicken Inn take on Caps United.
Both matches will be played at Barbourfields Stadium on the weekend of December 5-6 – the first time that Bulawayo will play host to the competition.
The matches will be screened live on SuperSport.
From the eight that started the competition, none has won a major cup this year with Dynamos claiming the Bob91 Super Cup and Highlanders winning the ZNA Commanders Charity Shield.
FC Platinum bagged the Independence Trophy and this represents a big chance for them to win something tangible.
Dynamos knocked out How Mine 1-0, Highlanders stunned FC Platinum by the same margin, Caps United thrashed Hwange 3-1 while Chicken Inn edged ZPC Kariba 4-3 on penalties after the match had ended 0-0 in regulation time to reach the last four.
A league and cup double now awaits the Gamecocks and coach, Joey Antipas, will certainly be going for the jugular against a red hot Caps United.