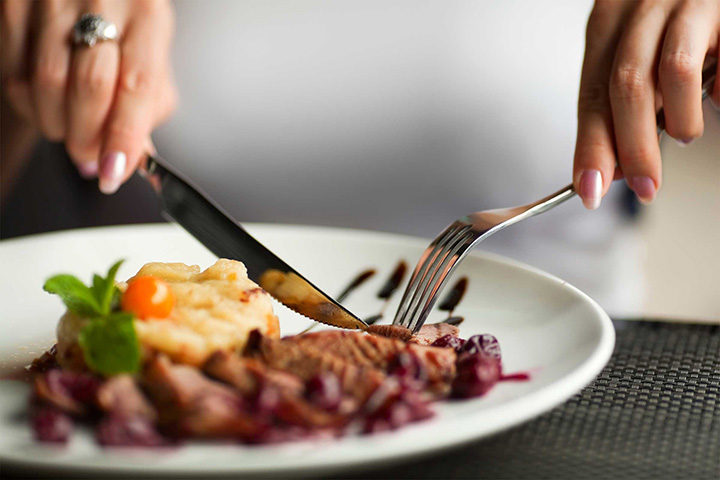 Foodies beware: A recent study has shown that the habit of dining out may raise your risk of cancer.

According to a new University of California and George Washington University study, as Newsweek reports, dining out may put you at risk for elevated levels of potentially harmful chemicals called phthalate that are linked to diseases like cancer. Many are wary of phthalates, which are often used in plastics. These chemicals, which can leach into food from processed materials such as food packaging, takeout boxes and gloves, can disrupt hormones in the body. A number of studies have linked several specific phthalates to breast cancer, type 2 diabetes and fertility issues, according to Newsweek.

Scientists from UC Berkeley were among those who examined data from the US National Health and Nutrition Examination Survey (collected between 2005 and 2014), in which 10,253 people were asked to recall what they ate and where their food came from over the previous 24 hours.

Levels of phthalate biomarkers were measured in each participant, as the Guardian reported. In all, 61 percent reported eating out the previous day. Levels of phthalate were nearly 35 percent higher than those who ate at home and the link was particularly strong for young people, said the researchers, reporting their findings in the journal Environment International.

“This study suggests food prepared at home is less likely to contain high levels of phthalates,” said senior author Ami Zota, an assistant professor of environmental and occupational health at Milken Institute School of Public Health at the George Washington University, as Newsweek cited. “Our findings suggest that dining out may be an important and previously under-recognized source of exposure to phthalates for the U.S. population.”

“Pregnant women, children and teens are more vulnerable to the toxic effects of hormone-disrupting chemicals, so it’s important to find ways to limit their exposures,” said lead author Dr Julia Varshavsky, from the University of California at Berkeley in the Guardian.

Dinner at home just got a lot more appetizing.