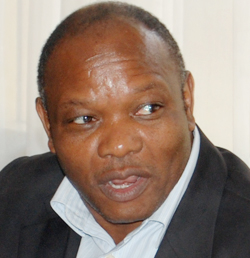 ZIMBABWE has lost about US$6 million in potential tourism revenue in the past few months due to fears of the Ebola virus ravaging some countries in West Africa, an official said Monday.
Zimbabwe Tourism Authority (ZTA) chief executive Karikoga Kaseke told Xinhua that the country’s tourism sector was beginning to reel from effects of unwarranted fears of the virus by potential visitors who were cancelling or postponing visits to the country.
The country has not recorded any case of Ebola since the epidemic began in West Africa in March.
However, the government is on high alert and has instituted preventive and control measures among them screening passengers and monitoring people coming from Ebola affected countries for 21 days.
An Ebola isolation centre has also been set up in the capital as part of the country’s preparedness to deal with the virus.
Kaseke said misleading reports in the local media about Ebola were scaring away potential visitors.
“The media has been giving conflicting stories as if there is some case of Ebola in the country,” he said.
“Zimbabwe is only taking measures and when you put someone who is coming from Ebola affected region under monitoring for 21 days, it does not mean that we have got Ebola.”
He accused the media of misrepresenting facts, and called for closer collaboration between health and tourism authorities for a swift correction of the negative perception.
“The media has misrepresented the situation in Zimbabwe and this has devastating effects on tourist arrivals.
“Zimbabwe is simply doing what the World Health Organization recommended for people coming from Ebola affected countries to be monitored and that monitoring is now being distorted as cases of Ebola being detected,” he said.
Tourism players, he said, were receiving cancellations on bookings on a monthly basis due to Ebola fears.
“I have been having complaints from tour operators, from tourism players who are incurring cancellations on a monthly basis ranging between 150,000 and 300,000 in revenue that we are losing because of these stories that are coming out,” Kaseke said.
“So the Ebola outbreak has devastating effects and since the outbreak, we have lost plus or minus 6 million U.S. dollars in terms of revenue that should have come to this country.”Advertisement

Kaseke said the negative perception must be urgently corrected because the country could not suffer on the basis of false information.
He also lamented that the country’s annual premier tourism showcase, Sanganai/Hlanganani Travel Expo set for next month had also been affected as some foreign exhibitors had withdrawn due to Ebola fears.
SADC has remained generally free from Ebola except for the Democratic Republic of Congo which has recorded cases.