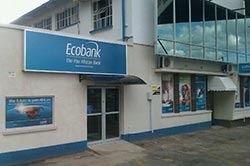 PAN AFRICAN banking group, Ecobank Transnational, has continued with its growth path in Zimbabwe with the addition of two more branches in Harare.
Headquartered in Togo, Ecobank has a presence in some 33 African countries as well as representative offices in France, UK and China.
Ecobank Zimbabwe commenced operations with three branches in Harare and Bulawayo in 2011 but has now spread to other towns and cities such as Chiredzi, Chitungwiza, Kwekwe and Mutare.
The group now has grown to 13 branches following the addition of two more branches in Msasa and Graniteside in the last quarter of 2013, thereby meeting its target for the year.
“The opening of these additional branches is a testimony of our commitment to fulfilling the promises we made to our customers when Ecobank invested in Zimbabwe two years ago; that is to make banking reliable, accessible and affordable to our retail and corporate customers” said managing director, Daniel Sackey.
“Graniteside and Msasa are strategic industrial sites whose potential any bank cannot ignore and provide Ecobank with a platform to serve not only the industrial customers but passing traffic and retail customers in the industrial environs, who we desire to provide with a pan African experience.
The bank recently posted an impressive set of half year results showing a firm return to profitability and significant growth after two years of consolidation and realignment post the acquisition transaction.
Sackey said, as the bank enters 2014, the growth impetus will be maintained with the opening of additional branches in Southerton, Gweru and Masvingo among other key cities and towns to ensure countrywide coverage.
“This will be buttressed with the launch of new technologically driven banking solutions that will include a robust mobile wallet, a Pan African Card and Acceptance of VISA, MasterCard and China Union Pay cards to offer enhanced convenience, accessibility and affordability to customers in and outside Africa,” he said.Advertisement