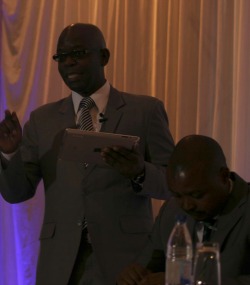 ECONET Wireless on Wednesday launched a new service which allows EcoCash customers to use the service as an interest earning savings account, potentially allowing millions of “unbanked” Zimbabweans to have a bank account.
Officials said the new scheme allows EcoCash customers to move money from their eWallet to an interest bearing account in a matter of seconds, increasing pressure on the country’s banking sector which has been feeling the heat from a service that was launched in 2011.
While banks “generally do not give interest on deposits of less than $800 the EcoCashSave deposit account will give interest even on $1 as long as the money has been there for 30 days”, Econet said.
“The EcoCashSave account is aimed at millions of people in the country who until now could not open bank accounts, because the amount of money they deal with is considered too small by banks. It is also intended for the informal business sector, including street vendors, to have access to banking services,” the company said in a statement.
“Opening an EcoCashSave account is also very simple, as a customer can set up the account on their phone themselves by following a few simple instructions. The EcoCash system is the one that sets up the account, and assigns an account number automatically.
“You also do not have to complete any forms if you already have an EcoCash wallet, neither do you need to see an agent, even though agents can help you. Once your account is open, you can move money in and out as you like without any charges whatsoever.
“The money held in EcoCashSave accounts is held by any of the banks that are integrated to the EcoCash system. It is also possible to move money from an EcoCashSave account to a normal bank account and vice versa, without incurring any charges.”
Speaking at the launch of the service, EcoCash chief executive Cuthbert Tembedza said: “This product is open to anybody to anyone you don’t need to be talking to any account opening administrator who will tell you to come next week you are your own administrator you are your own branch manager.
Econet group CEO Douglas Mboweni added: “We package this (service) so that the inhabitants of this nation wherever they are can just pluck those products wherever they are, without having to travel … and this is what we are doing.Advertisement

Econet also said employers can now use the EcoCash service to pay workers’ wages
“EcoCash has also set up a payroll services that allows an employer to send money to any number of people using a cell phone or computer,” the company said.
“A construction company for instance that pays weekly wages can use EcoCashPayroll to pay weekly wages into the EcoCashSave accounts of its employees.
“Once they receive the money, they can keep some of it and earn interest, and make bill payments whenever they like, or they can go to an EcoCash agent and get cash.”
With subscribers said to number more than two million and handling as much as US$100 million in urban-rural transactions, EcoCash has created waves on the local market.
Concerned by its rapid growth, traditional banks have unsuccessfully pressed authorities to de-register or regulate the platform arguing it was taking over their functions while not being strictly subject the same regulatory strictures.
Whilst mobile banking is relatively new in the country, exorbitant bank charges and meagre interest on deposits have seen the EcoCash facility becoming popular with the transacting public.