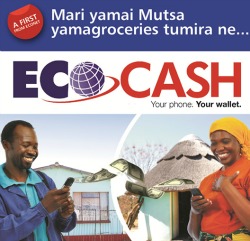 ECONET Wireless is undertaking a multi-million dollar expansion of its mobile money service, EcoCash, in response to its dramatic and unexpected growth since its launch in September 2011.
The expansion will make the EcoCash system four times bigger than it is currently, and also pave the way for the company to launch additional services.
Executives at the company concede they have been caught by surprise by the dramatic growth of EcoCash, and have had to scramble to order and install a much bigger system.
Engineers from the company’s suppliers have been in Zimbabwe for several weeks upgrading all the systems and they are expected to have completed their work by the end of September.
Econet Services CEO Darlington Mandivenga said Econet customers are no longer using the EcoCash system to simply send money to relatives in the rural areas at month-ends, but are now also using it to make all sorts of payments, including paying salaries.
Meanwhile, Zimbabweans in South Africa have now finally started sending money by EcoCash, Mandivenga said.
He confirmed that service was available from a few limited sites in that country until the full upgrade in Zimbabwe was complete.
“If we open up the service completely, we will have complete congestion. We have to wait two or three weeks,” said Mandivenga.Advertisement