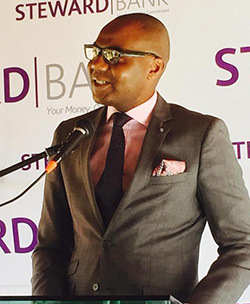 STEWARD Bank, built from the ashes of the failed TN Bank, has recorded its first ever profit of US$1.8 million over the six months to August this year.
Last year the bank, a subsidiary of telecoms behemoth Econet Wireless, reported a loss US$3.6 million over the same period.
Management changes were effected at the start of the year with the departure of chief executive Kwanele Ngwenya who was replaced by Lance Mambondiani.
Mambondiani was confirmed substantive CEO in August.
“This turnaround in the bank’s performance is mainly as a result of maximising synergies as well as the cost reduction initiatives,” said Econet chairman, James Myers, in statement accompanying the group’s results Thursday.
Income topped $5.3 million from US$2.8 million last year while costs came down to US$9.1 million from US$16 million.
“Our costs also retreated 38% compared to the same period last year following significant cost cutting initiatives undertaken in the first half as we aim to build a low cost structure supported by efficient digitalised channels,” said bank chair Oluwatomisin Fashina.
“Significant progress has also been made in cleaning up our non-performing loans (NPL), a result of which our NPL ratio came down from 37,8% to 13,1%,” he added.
Econet took over the struggling TN Bank and renamed it Steward Bank in 2013.
Much of the work over the last couple of years has also focused on addressing legacy issues arising from the failed TN Bank.
But Mambondiani told NewZimbabwe.com earlier this year that Steward was now one of the country’s most stable banks.
“We have gone a long way in addressing the legacy issues arising from the takeover of TN Bank.
“It has been a challenge but we are getting there,” Mambondiani said during the London stop of the bank’s diaspora outreach.
He added: “I can’t speak for the others, but Steward is ranked among the top five banks in terms of capitalisation.”Advertisement