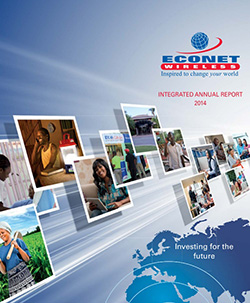 ECONET Wireless Zimbabwe has reported a 30 percent decline in after tax profit to $49,6 million for the six months to August compared with the same period last year as revenue growth continues to slow down, company financials showed on Thursday.
Revenue was up 4,2 percent to $392,3 million, a marked but not unexpected slowdown on prior years when it averaged double digit figures following the effective dollarisation of the economy in 2009.
The Earnings Before Interest, Taxation, Depreciation and Amortisation (EBITDA) margin was at 40 percent compared to 45 percent in the previous year.
The group’s net cash generated from operations sharply declined to $117 million from $186 million on weakening consumer spending triggered by a slowdown in economic activity.
Capital expenses such as depreciation and amortisation increased by 32 percent to $60,4 million in line with the growth of the asset base and as a result of the amortisation of the licence renewal fee of $137,5 million, the company said.
“Although revenue growth has slowed, this is in a context of declining revenues in most other industry sectors in the economy and lower economic growth,” group chairman James Myers said.
“We continue to invest in new products and services that allow for the continued growth of revenues through innovative services and this has resulted in margin pressures for the business.
“By so doing, the business is capturing opportunities that will allow it to drive revenue growth and margin improvement in the future as the revenues in these new products and services continue to grow and initial investment costs decline.”
During the period under review, the group recorded growth in broadband services albeit with low profit margins.
“We are excited about the prospects presented by the growth in data, EcoCash and other overlay services. Our business is ﬁrmly established as a leader in the market through its relentless pursuit for relevant solutions,” he said.
The company closed the period with $94 million in cash and announced a dividend of 0,61 US cents per share.
Econet’s subscriber base grew to just over 9 million by August 31, from about 8,5 million previously.Advertisement