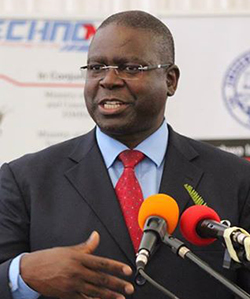 HARARE: Zimbabwe’s largest telecommunications company, Econet Wireless, has reported a 37 percent decline in after-tax profit in the half year ended 31 August 2016, as revenues continue to decrease in a worsening economy.
In results released on Monday, Econet said its profit after tax for the half year was $14.97 million, down from $23.8 million in the same period last year.
“Profitability was affected by the decline in revenues as a result of the difficult economic environment. We have therefore, continued to focus on cost reduction in order to protect margins and profitability,” the company said in its results statement.
First half revenue was $301.5 million, 6.7 percent lower than the from $323 million in the prior year. Earnings before interest, tax, depreciation and amortisation (EBITDA), at $105.9 million was 13.6 percent lower than in the first half of the previous financial year.
Econet’s flagship cellular network operations contributed 42 percent (51 percent in 2015) to net profit in the first half, lower than the group’s ‘other’ business segments — financial services, insurance, beverages and investments — which accounted for 57 percent (46 percent in 2015) of total net profit.
This was on the back of positive contributions by data revenue, up 10.5 percent to $58 million, and mobile money service EcoCash, whose revenue jumped 13.6 percent to $39.2 million in the period under review.
Finance costs decreased by 28 percent to $15 million in comparison to the prior year.
Total assets stood at $1,190 billion from $1,196 billion as at 29 February 2016.
The company’s wholly-owned subsidiary, Steward Bank, also reported profit was 38 percent up to $2.6 million.
The company’s number of connected subscribers went up by 9 percent to 10 million.
Econet closed the first half in a robust cash position, with $143 million in the bank, but the company bemoaned the ongoing cash crisis in the economy.
“Although the cash position continues to be healthy, the nostro funding constraints being experienced by all local banks have adversely affected our ability to meet US dollar denominated commitments on time,” Econet said.
The company, which spends 23 cents of every dollar it collects as revenue in VAT, excise duty and licence fee payments in addition to corporate tax, duty and levies to various statutory bodies, says it has paid a cumulative $1.2 billion to government and these statutory organisations since 2009, when the country dollarised.Advertisement

Meanwhile, Econet has been granted permission to defer its annual general meeting (AGM) to January 2017.
The AGM, supposed to be held six months after the firm’s February 29, 2016 year-end, was initially scheduled for July, but the Registrar of Companies has allowed the firm to push it to January, on a date yet to be finalised.