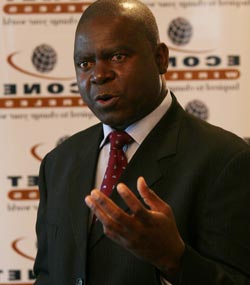 THE mobile data pricing rift involving the country’s three service providers spilled into parliament last week with Econet Wireless pointing accusatory fingers at State-owned rivals NetOne and Telecel.
However, the two parastatals took turns to dismiss Econet’s allegations, summing-up the stock-exchange listed company’s obsession with high mobile data prices as driven by desperation to clear international debts.
Econet CEO Douglas Mboweni told the Parliamentary Portfolio Committee on ICTs chaired by Kuwadzana legislator Nelson Chamisa that his company has been subjected to an un-even playing field for a long time.
He argued that NetOne and Telecel can afford to provide affordable data prices because they have softer terms for licence renewal fees.
“We had raised the issue of a level playing field and this is not the first time. It happened with the $137 million licence fees which Econet paid in full but others are yet to pay,” Mboweni said.
He said his company was surprised to find that it was the only one which had implemented the January 9 floor prices approved by Potraz—a charge dismissed by Telecel.
“We were the first to comply and implemented it on December 20, only to discover that other operators had not done so,” the company’s CEO Angeline Vere said appearing before the committee.
“Affordability is the only advantage we have. Our coverage is way low than Econet and Netone, that’s what we were trying to impress on them.”
On licence fees, she revealed her company had paid $4 million and was negotiating terms.
NetOne CEO Brian Mutandiro described the move by the country’s biggest mobile operator Econet Wireless as a desperate and aimed at fighting plummeting profits and arrest international debt.
“We sent a petition to Potraz, after it was turned-down we requested more time to communicate with subscribers because we knew it was detrimental to us,” said Mutandiro.
“We were going to suffer because One Fusion had given us growth. To be honest, it was Econet which was driving the process, we played along but knew it was not good.
“We feel their business model is under strain at the moment. Their market share is going down because of competition. They have huge international obligations.
“The Zimbabwe business has been the one carrying it and we feel that they have stretched themselves to a point that they are now asking for too much from the business.”Advertisement

NetOne’s market share grew from 33 to 37 percent while Econet – for the first time – was under 50 percent, according to the NetOne CEO.