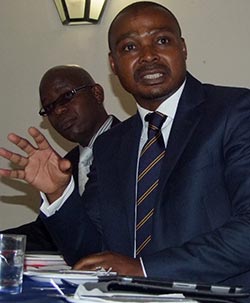 ZIMBABWE’S largest mobile telecoms company by earnings and subscribers Econet Wireless and Western Union Company, a leader in global payment services, have teamed up to offer consumers fast and reliable international money transfers.
Under the deal, customers in Zimbabwe who use the EcoCash mobile money service now have the option of receiving a Western Union Money Transfer transaction on their mobile phones.
This comes at a critical stage for Zimbabwe, with the central bank earlier this year declaring it was exploring more facilities to effectively harness diaspora savings for the development of the domestic economy.
Zimbabwe has a strong skilled and non-skilled diaspora mainly in South Africa, the United Kingdom, Canada, Australia and the United States who regularly send money back home to sustain their families.
While US$1,8 billion was sent through formal channels, there was a large amount that was sent through informal channels.
Western Union regional vice president for southern Africa, Richard Malcom, said his company was delighted to be part of the collaboration with Econet Wireless and supports accessible remittance transfers for the diaspora sending money to Zimbabwe.
“We believe that this is a remarkable continuation in facilitating financial inclusion in the country – especially in the rural areas with limited formal financial institutions.
“Whether it’s for an individual, a family or a small business, sending or receiving money across global and national borders; reliably, conveniently; making payments for goods and services in today’s world, all are basic requirements for economic development and financial inclusion,” he said.
EcoCash, which was launched in 2011, currently has 4 million subscribers and an expansive network of 15,000 agent points. About 43 percent of Zimbabwe’s annual GDP moves through the service.
Econet Services International Chief Executive Officer Darlington Mandivenga urged Zimbabweans abroad to utilise the Western Union-EcoCash remittance service for its increased convenience, speed and reliability.
“Since launching our international money transfer service in June 2014, we continue to accommodate the Zimbabwean diaspora by widening our first-mile footprint abroad and giving our customers unparalleled choice.Advertisement

“It is evident that funds repatriated to Zimbabwe by the diaspora continue to rise, with a positive impact on supporting basic human needs while playing a vital role in boosting economic activity,” he said.
As a result, he said Econet made it their objective to ensure that they go a step further to offer a globally accessible, fast and reliable service such as Western Union Money Transfer.
“This cooperation continues to build on Econet’s efforts in furthering the economic development and stability of the nation at a time when the government has been actively raising awareness of the importance of the Zimbabwean diaspora,” Mandivenga added.
EcoCash has become the pivotal transacting platform in Zimbabwe Western Union offers a fast, reliable and convenient way to send and receive money through traditional, online and mobile channels.
Western Union services are available through a combined network of nearly 500 000 Agent locations in over 200 countries and territories around the world.