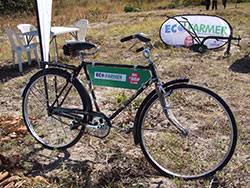 ECONET Wireless Zimbabwe’s farm insurance scheme paid out to scores of Mutoko farmers last week with many commending the telecoms giant for helping cushion them against drought-induced food shortages and hardships.
EcoFarmer is Econet’s farming insurance initiative which, apart from providing a cash or input cover to farmers hit by drought, also comes with information on farming tips, market prices and other agronomic educational materials to subscribers.
Under the scheme, members pay subscriptions of either $2,50 or $10 to be eligible for cover.
If an area receives below 2,5mm rainfall for 24 consecutive days during the rainy season between November 15 and April 30, subscribers will be eligible for inputs or cash payouts as cover. The insurance also applies in cases of excessive rainfall that can affect crop yields.
“For $10 the farmer will be paid a sum of $100 which is enough to buy a tonne of maize that will be enough staple food until the next rainy season.
“And for $2,50 a farmer will be paid $25 which is enough to buy a 10kg bag of maize seed,” said Godwin Mashiri, head of Econet Insurance during a pay-out to 23 members from Mutoko last Wednesday.
Said one of the beneficiaries, Loice Chimhanda, 51, from Zimora village under Chief Mutoko: “The programme is good since it helps us to grow crops with the assurance of getting some benefits in the event of a drought.
“This is also a self-funded programme since I would have contributed premiums to cushion against possible disasters and risks. It’s unlike when we used to depend on food hand-outs from NGOs without our own input to change our situation for the better.”
Mashonaland East provincial agricultural extension officer, Walter Mugabe, said the scheme was also an important tool for an end-of-season performance review for rural farmers.
“Personal and farming improvements are not possible without a thorough understanding of one’s performance; where one went wrong, and how one can improve,” he said.
“In this regard, there is no better time to review the farm’s performance than at the end of the season.
“Although farmers are used to green crop field days, I would want to commend Agritex and EcoFarmer for piloting the concept of end of a season performance review field day as this is the best time to take stock of one’s performance.”Advertisement

Meanwhile, the trend towards drier seasons was an increasing phenomenon particularly in climatic regions four and five, Mugabe said.
He said due to global warming, agricultural seasons were now starting much later and finishing a lot earlier with mid-season dry spells becoming more unpredictable.
“All these are characteristic of the much talked-about climate change,” he said.
“The impacts of climate change are more devastating in rural Africa, where farmers typically depend on agriculture which, for most farmers, is rain-fed. As a result, in many years, farmers fail to get a meaningful harvest.”
However, the use of drought resistant crops, selection of early maturing varieties and production of drought tolerant crop types, as well as early planting can help reduce the impact of climate change.
EcoFarmer handed over $100 cheques to nine farmers and $25 each to 13 others bringing the total pay-out in the area to $1,250.
Econet chief marketing officer, Isaiah Nyangari, encouraged other farmers in the area to join the scheme in order to cushion themselves against the ravages of drought in future.
“We have seen farmers who, despite discouragement by friends and relatives, felt that insuring their crops against drought was a necessary move being rewarded for their faith in EcoFarmer.
“I would want to congratulate these farmers for making this bold move. Today you are the envy of your neighbours and you will not trouble government or donors for food aid,” Nyangari said.