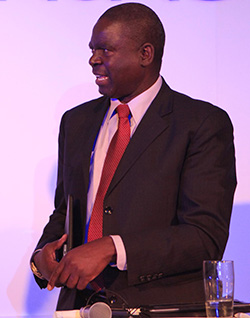 ECOCASH, the mobile money transfer service of Econet Wireless, on Wednesday launched an international debit card in partnership with MasterCard.
The move is meant to increase financial inclusion in a highly informalised economy as well as reliance on banknotes in the cash-strapped country.
“The adoption of electronic payments is critical to Zimbabwe’s economic development. Reducing dependency on cash while increasing financial inclusion benefits the whole country including the government, industry sectors like tourism and retail, merchants and citizens,” said Douglas Mboweni, CEO of Econet at the launch of the card on Wednesday.
Zimbabwe ditched its own currency for the US dollar and the South African rand five years ago at the peak of an economic crisis.
Dumping of the Zimbabwe dollar in 2009 helped stabilise the economy and tame crippling hyperinflation.
But it has also created new headaches, including a lack of small change, forcing people to use heavily spoiled notes.
EcoCash will roll out 3,5 million debit cards whose transactions will be underwritten by Steward Bank, a commercial bank owned by Econet. The bank has been processing more than $350 million transactions for Ecocash per month, officials say.
EcoCash chief executive officer Cuthbert Tembedza said the new debit card, whose transaction cost would be between 30 cents and $2,45, will carry high security features to curtail fraud and other financial crimes.
“The card reduces the risks of carrying large sums, the chip and pin code on the card cannot be cloned and this is the only MasterCard linked to your mobile phone,” Tembedza said.
He said it will also promote financial transactions anchored on the MasterCard platform.
Tembedza said the new debit card would also improve visibility of transactions carried by the informal sector as well as promote a cashless society.
“As EcoCash enables its customers to benefit from MasterCard’s global payments network, we are assisting Zimbabwe to integrate its economy with those elsewhere in the world.
“Importantly, we are also contributing to the financial freedom of individuals,” added Charlton Goredema, Vice President and Area Business Head, Southern Africa, MasterCard.
The card will enable EcoCash customers to withdraw money from MasterCard-licensed ATMs and pay for goods and services at millions of merchants that accept MasterCard payment cards, both in Zimbabwe and internationally.Advertisement

Launched in the last quarter of 2011, EcoCash has reached in excess of 4,2 million users, processing over $4 billion worth of transactions.