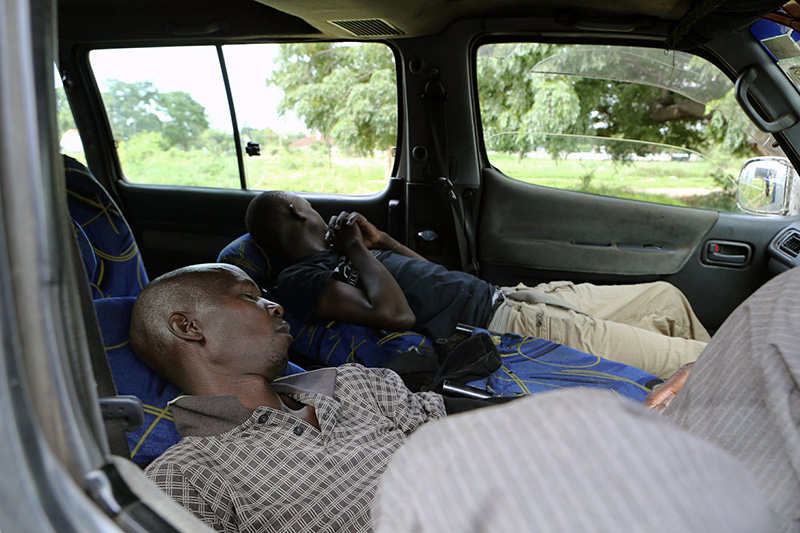 In this photo taken on Friday Dec, 21, 2018, motorists take a nap while in a fuel queue in Harare. The Christmas lights are up in Zimbabwe's capital but the mood is less than festive as the country grapples with an economic crisis that prevents many families from enjoying the holiday season.
Spread This News

At Solomon Chakauya’s grocery store in Zimbabwe’s Chinamhora district outside Harare, there’s no sign of the seasonal Christmas rush that he needs to keep his business afloat.

Even in the country’s toughest times, sales rocketed in the days before Christmas, but this year few people are able to buy anything.

It is a far cry from the revived economy that President Emmerson Mnangagwa promised more than a year ago when he took over from the ousted Robert Mugabe.

Instead, shortages of bread, cooking oil and fuel have worsened in recent months, banknotes become even scarcer and shop shelves have often been left bare.

“In previous years, people would stream in to buy things like rice, oil, biscuits, sweets, soup powder and drinks. It was so busy I would be on my feet all day,” Chakauya, 29, told AFP.

“Things are tough and most people have no money.”

But over this holiday season, Chakauya has sometimes had only four customers a day, leaving him to kill time sitting in the shade in front of his store.

‘I don’t consider it Christmas at all’

Local villager Emilda Chingarambe said that for the first time in many years she could not buy her two daughters new clothes for Christmas day.

“I don’t consider it Christmas at all,” said Chingarambe whose husband works part-time as a labourer tilling fields.

“There is no bread in the shops. We can’t afford flour and groceries we usually buy for Christmas.”

Shortages have fuelled a ferocious climb in prices and long queues.

In Chinamhora, a litre of cooking oil was around $3.50 in early September and is now selling for $10. Inflation is officially 20 percent.

Once ubiquitous soft drinks such as Coca-Cola and the local Mazoe juice have also become hard to find.

Zimbabwe’s economy has been in dire straits since hyperinflation wiped out savings between 2007 and 2009 and the Zimbabwean dollar was abandoned.

Under Mugabe, farms were seized, agriculture collapsed and investors fled as the country became internationally isolated.

But the country has only lurched into fresh economic trouble after July that failed to encourage foreign investors or to unleash a flood of aid.

“The challenges have dampened the festive mood,” Prosper Chitambara, economist at the think-tank Labour and Economic Research Institute, told AFP.

The latest downturn erupted two months ago when finance minister Mthuli Ncube announced a two-percent tax on all electronic transactions to increase revenue.

Zimbabweans rely on electronic payments in US dollars, which are in short supply and function as the main currency. The local “bond note” currency is little trusted.

Many shops and pharmacies have closed down in the capital, Harare. Those still operating charge much more when customers pay electronically or in bond notes than in US dollars.

In one shop, a bottle of paracetamol syrup is 3 US dollars in cash, 15 dollars in bond notes — and 17 dollars when using a bank card.

Doctors at state hospitals have been on strike for the past three weeks demanding salaries in US dollars while a group of teachers completed a 200km walk from the eastern city of Mutare to Harare to demand better pay.

He offered little immediate relief, instead blaming “gluttonous” businesses for price rises that “resulted in untold suffering to the majority of our people.”