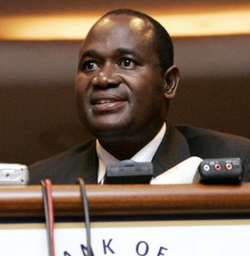 ZIMBABWE’S fledgling economy requires a decisive winner in Wednesday’s general elections, Reserve Bank governor Gideon Gono said.
“The economy desperately needs a clear winner and a peaceful ending to the electoral processes for it to stabilise and prosper,” the RBZ chief said in a statement.
Zimbabweans will cast their votes between 7AM and 7PM bringing the curtain down on a power sharing government between Zanu PF, the MDC-T and the MDC which was accused of policy paralysis.
The winning presidential candidate should get at least 50 percent plus one vote, and Gono says a 2008 scenario where none of the candidates reached that number triggering a run-off which was marred by violence could seriously hurt the economy.
Gono says a decisive win for one of the parties will give the country a clear policy direction for the next five years.
Gono was due to give his mid-term monetary policy statement this week but announced Tuesday he was postponing it to after the elections in August.
“Until then, banking-sector players and all stakeholders should go about their business in the normal way, remembering that the saying “Peace begins with me; Peace begins with you and Peace begins with all of us” must remain our Zimbabwean prayer during and after voting on Wednesday,” he said.
Gono, one of President Robert Mugabe’s closest lieutenants, said he would be voting at Heritage School in Borrowdale at 9AM on Wednesday.Advertisement