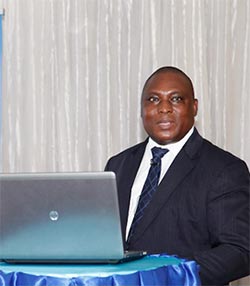 THE economy is not in deflation, but is self-correcting after a period of high prices that followed the hyperinflationary phase, banking group FBC chief executive John Mushayavanhu has said.
Zimbabwe, whose annual inflation reached 500 billion percent in December 2008 at the height of a political and economic crisis, has seen the figure coming down to negative territory following the country’s adoption of multiple foreign currencies – mainly the United States dollar and South Africa’s rand – in 2009.
Annual inflation was reported at minus 0.49 percent for February, triggering debate among analysts as to whether the country had slipped into deflation or if it was just experiencing price correction.
Speaking at the launch of the 2014 Central African Stock Exchanges handbook on Wednesday,
Mushayavanhu said the high margins most businesses continued to enjoy after dollarization had been checked by tight liquidity conditions in the economy.
“If you look at our inflation, I believe that is a correction of past mischief and for me it is a good thing,” he said.
“In the past people were used to make higher margins but I think now that we have adopted the US dollar, many have realized that there is still an opportunity to make money with lower margins.
“This is why we have seen prices falling and that does not necessarily mean that the country is headed towards deflation. If you can’t make it in the US dollar economy then you cannot make it in any other circumstance.”
Zimbabwe’s annual inflation for April rose by 0.65 percentage points to -0.26 percent from -0.91 percent in March, pointing towards price stabilisation.
The month on month inflation rate was 0.58 percent, gaining 0.81 percent from -0.22 percent in March.Advertisement