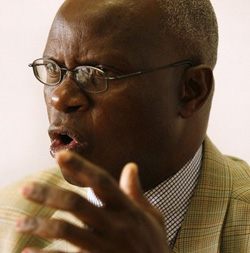 THE economy is expected to grow 6.1 percent next year from 3.4 percent this year on the back of rising revenues, finance minister Patrick Chinamasa was quoted as saying on Tuesday.
The country is experiencing an economic slow-down on the back of a decline in agriculture output and jitters surrounding a July 31 election that was won by veteran leader Robert Mugabe.
Chinamasa was quoted by the state-owned Herald newspaper as saying he expected revenues to rise to $4.4 billion next year from $3.7 billion this year.
He did not give a reason, but the government has said it expects more money from diamond sales after the European Union removed sanctions on the state-owned Zimbabwe Mining Development Corporation.
“In terms of key projections the economy is projected to grow from 3.4 percent to 6.1 percent and a nominal gross domestic product of $15.5 billion,” Chinamasa said.
Chinamasa could not be reached for comment.
Chinamasa has said he will stick to an IMF staff-monitored program agreed earlier this year as a way of repairing ties and having Harare’s debts rescheduled.
An IMF team is due to visit for two weeks from Wednesday, Chinamasa said, to review Harare’s progress towards meeting key targets such as keeping inflation in check and putting more money towards capital projects.Advertisement