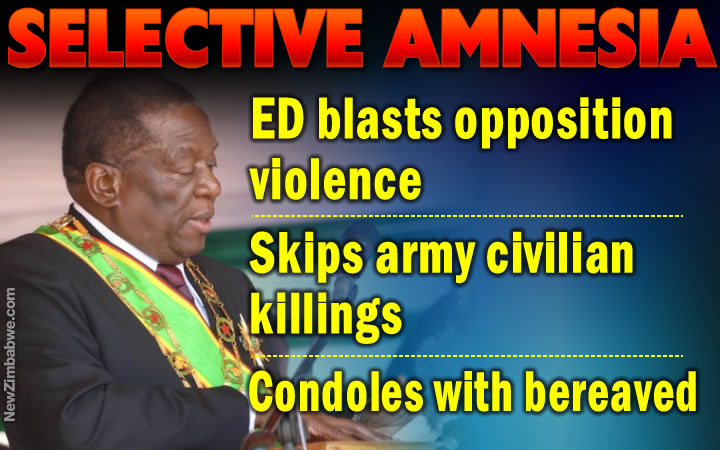 President-elect Emmerson Mnangagwa Tuesday chose to ignore army’s heavy hand in dealing with recent civilian protests but directed blame at his MDC Alliance opponents for allegedly inciting the violence that saw the military gunning down six.

He was giving his keynote address during the annual Defence Forces Day commemorations at National Sports Stadium in Harare.

The celebrations were the first he has officiated as the country’s new leader since he muscled his way to the top job on the back of a military coup against his former boss Robert Mugabe last November.

“I am however deeply concerned with the incidents of violence that rocked the streets of Harare at the instigation of some members of the MDC Alliance leadership, which subsequently resulted in the regrettable loss of lives, injury to persons and damage to property,” he said.

“On behalf of the government and indeed on my own behalf, I would like to extend my deepest condolences to the bereaved families and relatives of the victims of the politically motivated violence.”

The six civilians killed were among MDC Alliance protesters and bystanders during angry reactions to the announcement of election results which gave Zanu PF a crushing victory over the main opposition.

The MDC Alliance is adamant Zanu PF manipulated systems to emerge with victory.

The occasion of the Defence Forces Day celebrations brought back spotlight on the involvement of the country’s military on civilian affairs, starting with the popular coup that ousted former  Mugabe right up to the killing of civilians August 1.

The sudden outbreak of violence, coupled with the heavy-handed army reaction, dented what was widely seen as the most peaceful election Zimbabwe has ever had since independence.

“The politicians who gave this unlawful august 1 order have not been held to account. This is because impunity reigns in this outgoing government,” he said, while singling out the military for praise.

“The abuse weakens our military and arouses public resentment against the gallant sons and daughters who protect our country,” he added.