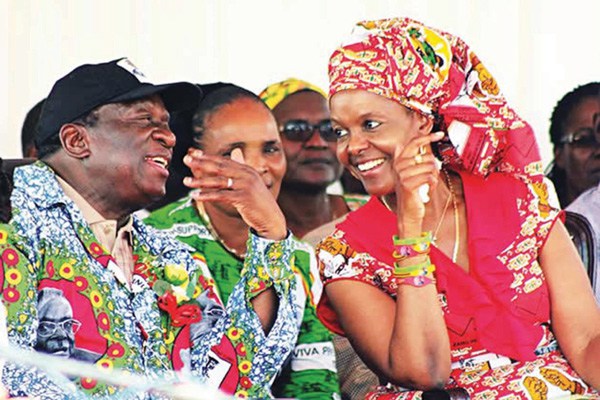 Time for gossip...then VP Mnangagwa and Grace at a Zanu PF rally
Spread This News

EXILED former cabinet minister Jonathan Moyo says he did not at one time find the now President Emmerson Mnangagwa and then First Lady Grace Mugabe close to being presidential material.

Mugabe was ousted November 2017 in a military coup that ushered in his former top aide turned bitter enemy, Mnangagwa.

Moyo, once a close ally to Mnangagwa, said during the time he worked with the then Vice President, the latter never convinced him he possessed any presidential qualities.

“When I worked with Mnangagwa, he wasn’t a president & he had no presidential qualities. I worked with Mugabe, a great nationalist but weak policy implementer,” Moyo responded to twitter followers.

The once Zanu PF top strategist said his choice for Mugabe’s successor was then Defence Minister Sydney Sekeremayi and not Grace Mugabe as was widely believed at the time.

“It’s no brainer that the November 2017 military coup was masterminded by Chiwenga with support of the command element,” Moyo responded.

“Mnangagwa was key beneficiary, not architect of the coup because the commanders, who now regret it, needed a political face to front the coup.

“I was not in a position to prepare Amai Mugabe to take over from her husband. The chilling though of getting involved in President Mugabe’s family matters never crossed my fearful mind.

“And, I never saw her as presidential material. My public choice was Sydney Sekeramayi.”

Moyo said he knew of the plot to topple Mugabe way before but could only alert a then ageing leader who did not take action.

“I was not in a position to stop military coup beyond alerting President Mugabe, who was the Commander in Chief of the Defence Forces that a coup was brewing up, even that alert was not much because I was not a security minister and I had never been part of the JOC circle.”

Turning to his own personal affairs, the once fierce Mugabe critic turned defender said he had no qualms living in exile.

“There’s nothing new to me or particularly challenging about living in exile. I did it before for many years. I’m a veteran exile. Unlike them, today’s world does not leave one with a feeling of distance. We now live in one world no matter where we are space wise,” he said.

Moyo, once kingpin of G40, a clique of Zanu PF politicians who once put up a wall against then VP Mnangagwa’s manoeuvres to succeed Mugabe, said he was nolonger a fan of party politics.

“I have no time to waste in party politics. In an event, I think political parties are outdated as instruments for reforms or real change in Zimbabwe. What’s now needed is a broad movement of coalitions.

Commenting on Mnangagwa’s calibre of ministers, Moyo said, “By definition, an illegitimate government cannot have good ministers. The current ministers in Mnangagwa’s administration is a collection of worst distinguished by their deadly missteps, That’s why #ZanypfMustGo.”