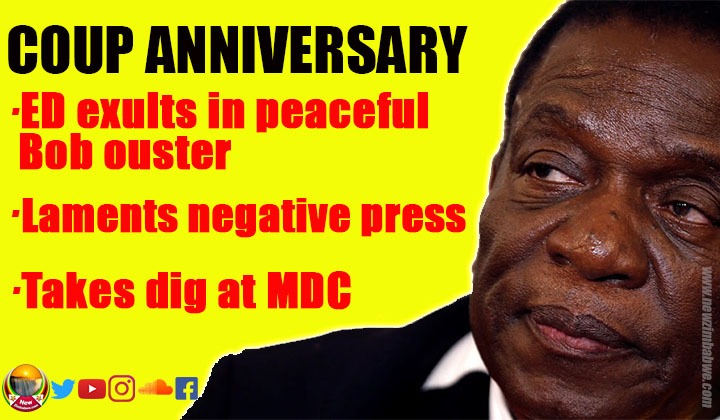 PRESIDENT Emmerson Mnangagwa has lamented what he says was negativity that has pervaded the Zimbabwean society since he took over as the country’s leader a year ago.

Writing in what has now become his weekly column in the State controlled Sunday Mail, Mnangagwa suggested there was an “air or regret” over events that swept him to power on the back of a military coup November last year.

The President said the country has had to pay a premium because of the negativity churned out by local media despite what he called “clear indications of shoots and saplings” emerging in the economy.

“As I write, we are about to commemorate the first anniversary of dramatic events of November last year which positively changed the course of our national history, and even setting new precedent in world politics,” he said.

“I am referring here to Operation Restore Legacy in which Zimbabweans of all colour, creed and politics participated to usher in a new political and economic dispensation we now live in and enjoy today.

“What distinguished this revolution from all others that have happened on our African continent and elsewhere in the world is the sheer peace which accompanied it.

“Yet reading through review articles in newspaper columns today, the focus is on ‘guns’, and not on ‘roses’ which made the whole episode such a unique and an enchanting model in social change, unexampled anywhere in the world. Indeed these negative pieces seem to suggest a sense of national regret.”

Mnangagwa said Zimbabwe was now like a magnet to foreign investors who were making a bee-line to the country.

“Presently, Zimbabwe is like a bright flame to a moth. Businesspeople from all corners of the globe head here to scout for opportunities which our country offers.

“They are unanimous that Zimbabwe has some of the best opportunities found in emerging markets. Foreign companies doing business here post very good results,” he said.

In comments apparently directed at the MDC which has laid siege on his administration, the President admitted the opposition must provide checks and balances but quickly cautioned, “not for the sake of it”.

“I concede that pessimism is a human mood, and one often understandable in a given set of circumstances or against a certain history. I concede, too, that the role of the opposition is to criticise. But not just to criticise and to be negative for the sake of it,” Mnangagwa said.

“Not with so many recovery ‘shoots’ sprouting, some of which are fast maturing into sprite and promising saplings.”

Zimbabwe slid back into economic turmoil under a year since hope was restored by Mugabe’s departure.

Prices of goods and services have shot through the roof with the chaos attributed to government’s unpopular imposition of a 2 percent tax on all electronic transfers.

Supermarket shelves began to empty and the country has once again found itself in the vortex of an economic meltdown.

Mnangagwa suggested continued regret and self-pity among locals portrayed a negative picture of a country in distress among outsiders keen to come and set up businesses in Zimbabwe.

“It is a well-known fact that capital is a coward,” he said.

“Or both ills became false and unwarranted questions we have to answer out there, protractedly; false benchmarks by which we get judged and even condemned.

“The bad talk turns into a premium the country has to pay to compensate for falsely invented country risks.”

The President said he has desperately tried to protest that the negativity was unfounded but this seems to have fallen on deaf ears.

“…our would-be benefactors draw our attention to ‘reports from Zimbabwe’, from ‘home’.

“They will refer us to negative media reports and uninformed opinions which, even though penned in ignorance or playfulness, suddenly assume a seriousness out there which decides our fate as an economy and as a nation,” Mnangagwa added.

“As a consequence we get rated down, and thus forfeit deserved opportunities.”