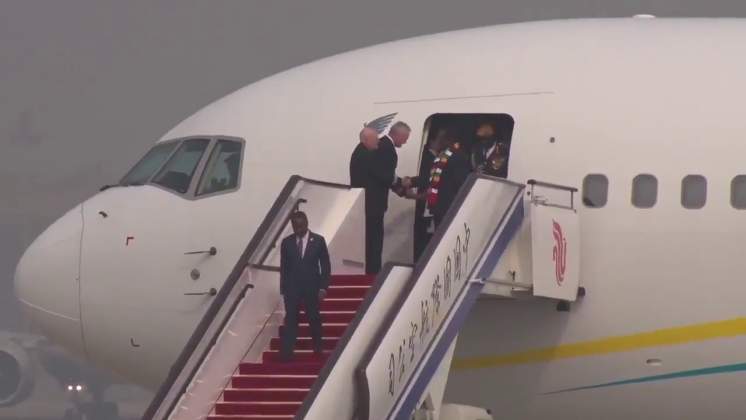 PRESIDENT Emmerson Mnangagwa has claimed the luxury private jet he has been using since his visit to the United Arab Emirates (UAE) early this month is a “gift” from the oil rich Middle East enclave’s rulers.

Mnangagwa was addressing the Zanu PF central committee Friday where he claimed Zimbabwe had not “paid a single cent for the trip.”

“They (his hosts UAE) looked after us well then we hear some saying we have hired a plane for that visit. Forget about that. They sent us their plane.

“We never paid anything as Zimbabwe. The Crown Prince sent us a huge plane to carry us and it returned us (home). I told him that we have a challenge of planes so every time I want to travel I will just call and he will send us the plane,” Mnangagwa said.

“So those who don’t know were just parroting what they don’t know and I just laughed it off.”

Mnangagwa has been using the Airbus A318-100 even for local trips in what his spokesperson George Charamba says is aimed at freeing national flag carrier Air Zimbabwe’s single plane to service whatever routes it can and avoid inconveniencing its clients.

Critics have argued Mnangagwa who rose to power on the back of a military coup in November 2017 has shown an insatiable appetite for flying following in the footsteps of his predecessor former President Robert Mugabe whose penchant for travel earned him the nickname “Vasco da Gama” after the Portuguese explorer.

The Zanu PF leader said the little assistance Zimbabwe is getting is because of his travels.

“It is a result of these engagement and re-engagement efforts that we receive overwhelming support from countries such as United Arab Emirates which I visited earlier this month as well as Tanzania, Botswana, Namibia, South Africa and many other countries that have supported us.

“It is because that we have engaged them. So it is critical that engagement should continue. You can hear some people saying why is the President travelling? If we had not been travelling engaging these countries, were we going to get all the medicines that we have received? No,” thundered Mnangagwa declaring he will not stop.

“In the period under review, we continue with the engagement and re-engagement policy. As a result, we have witnessed concrete investment commitments from across the world. This will cumulatively have a positive impact on our overall economic growth and the creation of jobs for our people.”

Zimbabwe, Mnangagwa added is shaking off its pariah tag earned under Mugabe’s rule.