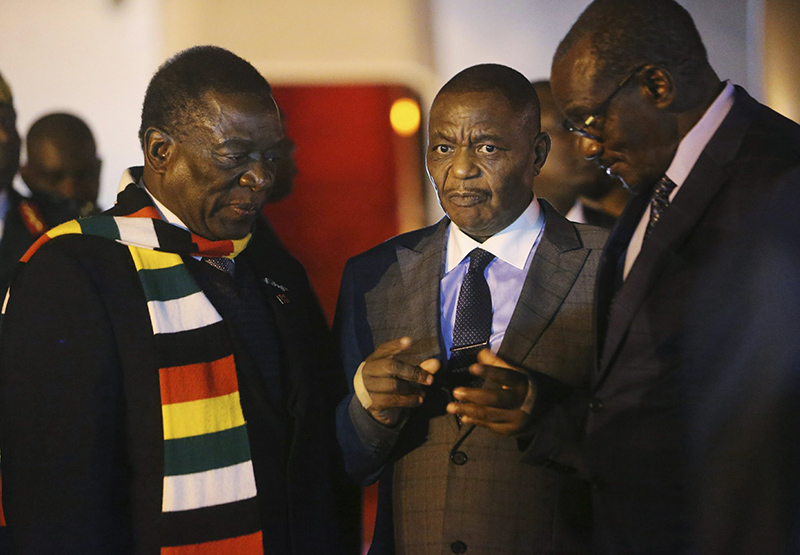 PRESIDENT Emmerson Mnangagwa vowed on Tuesday to investigate security forces over their deadly crackdown on protesters, as he returned to the country and scrambled to fend off a barrage of criticism.

The crackdown has shattered Mnangagwa’s claims to have turned a fresh page after the violently repressive era of Robert Mugabe, who was ousted from power by the military 14 months ago.

“Violence or misconduct by our security forces is unacceptable and a betrayal of the new Zimbabwe,” Mnangagwa said on Twitter.

“Chaos and insubordination will not be tolerated. Misconduct will be investigated. If required, heads will roll.”

He also condemned the protests last week that were marked by rioting and looting.

“Everyone has the right to protest, but this was not a peaceful protest. Wanton violence and cynical destruction,” he said. “This is not the Zimbabwean way.”

The protests, which were sparked by the government’s more than doubling of fuel prices, were met with a ruthless response from the army and police.

It said that armed soldiers and police had visited many homes at night to give “indiscriminate beatings” to men and boys as young as 11.

“Torture was perpetrated through beating the men with baton sticks on their backs while they lay on the ground,” it said, adding that attack dogs were used and victims were often too scared to seek medical attention.

Other civil society groups say at least 12 people were killed in the crackdown and scores treated for gunshot injuries, as well as reporting hundreds of incidents of assault and torture.

About 700 people have been arrested, officials say.

Mnangagwa, 76, who was Mugabe’s former deputy, said raising fuel prices “was not a decision we took lightly. But it was the right thing to do”.

“What followed was regrettable and tragic,” he added.

He had visited Russia, Belarus and Azerbaijan and Kazakhstan before scrapping his planned attendance at the Davos summit of world leaders this week.

Mnangagwa has repeatedly pledged that Zimbabwe entered a new era when he came to power in November 2017 after Mugabe was toppled, ending a 37-year bloody authoritarian reign that saw the country’s economic collapse.

But Zimbabweans have seen little evidence of the promised economic revival or increased political freedoms.

The president’s election victory in July was tainted by accusations of fraud — and outrage when troops opened fire on protesters in Harare, killing several, before the results were announced.

The protests in Zimbabwe were fuelled by daily shortages of banknotes, fuel, food and medicine, as well as mass unemployment

The UN human rights’ office last week also criticised the government’s reaction to the latest protests, which were fuelled by daily shortages of banknotes, fuel, food and medicine, as well as mass unemployment.

The army and police have denied any wrongdoing, saying some assailants raiding homes and beating people were wearing official uniforms to pose as security personnel.

“We don’t trust his word. We don’t regard him as an honest leader,” MDC lawmaker Morgen Komichi told reporters after Mnangagwa’s announcement of an investigation into the security forces.

Human rights lawyers said 28 people seeking treatment after the crackdown at a medical centre in Harare were arrested on Tuesday.

The High Court in the capital ruled Monday that government had no powers to order the shutdown of the internet that was imposed as protests swept across the country.

Internet and social media appeared to be returning to normal on Tuesday.

Mugabe, now 94, ruled Zimbabwe with an iron fist from independence from Britain in 1980 until November 2017.

The military, fearing that Mugabe’s wife Grace was being lined up to succeed him, seized control and forced him to resign before ushering Mnangagwa to power.