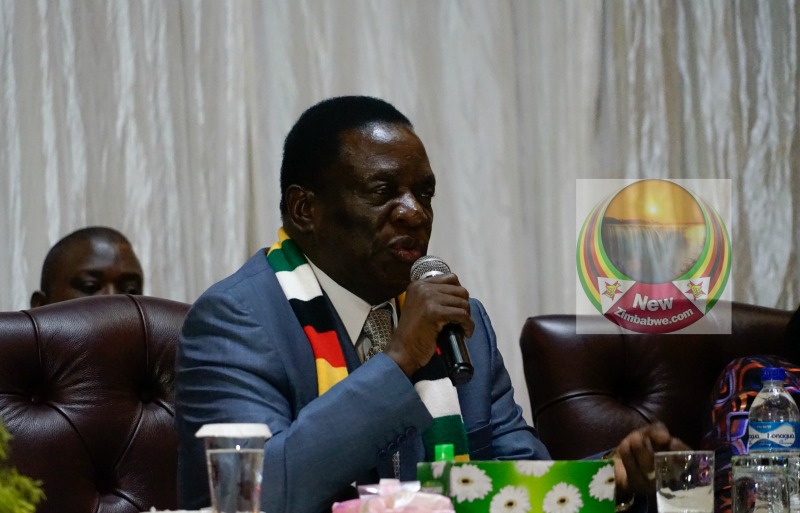 PRESIDENT Emmerson Mnangagwa says he will not sit idle when his lieutenants continue to plunder the country’s resources and causing suffering to the masses.

In his address to the Zanu PF central committee Thursday, Mnangagwa suggested there were party leaders using their positions to loot the country’s resources.

“In the Second Republic, there will be no leniency for the corrupt and those who cause suffering to the people,” he said.

“The party must resist the temptation of defective thinking, unhealthy practices and staying in the comfort zone.”

Mnangagwa has come under fire from government critics for employing a half-hearted approach to fighting corruption.

Since taking over as President almost a year ago, his much touted anti-corruption crusade has only targeted his former Zanu PF rivals with only one high profile figure in ex-Energy Minister Samuel Undenge having been jailed so far.

However, in threats to come down on his corrupt comrades, Mnangagwa seemed to resonate with axed Finance Ministry Communications Taskforce chair Acie Lumumba, real name William Mutumanje, who threw the cat among the pigeons early this week through claims some powerful Zanu PF officials were fanning an illegal but thriving foreign currency market.

Mnangagwa continued, “In the wake of extremely wicked activities by gluttonous persons and businesses in our economy, I challenge you as the party to be highly disciplined and upright in your dealings.

“Shun all forms of corruption and be exemplary. Political positions should never be a licence to loot or abuse the offices you hold.

“We must cultivate a culture of responsible citizenry in acts and in deeds not merely in talk.”

Mnangagwa said his government was aware of the “machinations of some detractors and economic opportunists who are bent on creating despondency in the country through the manipulation of the foreign currency market and creation of artificial shortages.”

In the past three weeks, the country has witnessed soaring prices of commodities and services as businesses went into panic mode following Finance Minister Mthuli Ncube’s introduction of tough economic measures to remedy a dire economic crisis.

Mnangagwa added, “This has caused untold suffering to our people. As a listening President, I have heard their cries and my government is determined to provide solutions to these perennial challenges.

“The lifting of the ban on Statutory Instrument 122 is one such move which is meant to provide relief to our people,” he said.

The President said he was neither prepared to allow suffering Zimbabweans go without basic commodities nor allow the “willy-nilly depletion of incomes by a few rogue businesses and persons”.