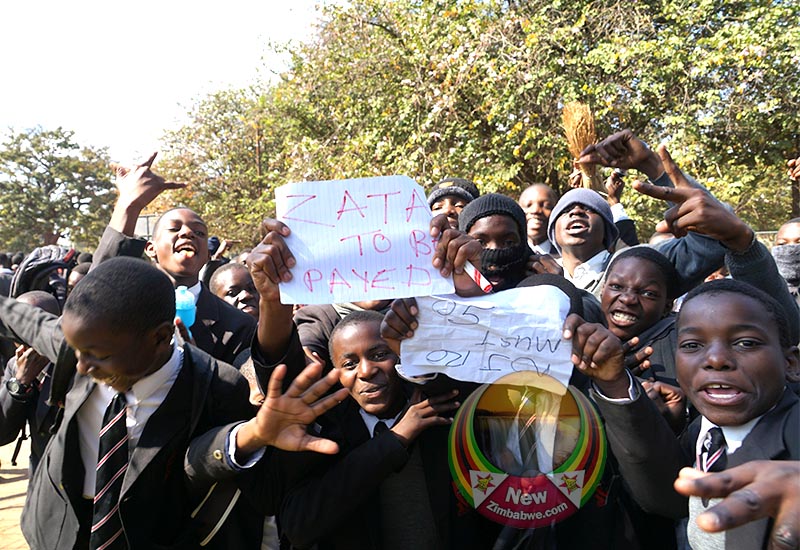 PUPILS at Allan Wilson Boys High School in Harare, Monday staged a demonstration for the third day calling for the removal of the school headmaster identified as Njitimana and his deputy Gandidzanwa.

The boys also want Gandidzanwa and his relatives to find alternative accommodation in residential areas rather than sharing hostels with them denying some prospective pupils accommodation.

Before the meeting with the officials, the students protested against the presence of anti-riot police at the boys school arguing they were not criminals.

The protesting students were holding placards written, among other messages, “Enough is Enough”, “Njizo Must Go” and “No to Corruption”.

“They are also accusing the headmaster of looting school funds. The school lab has been turned into a classroom as we are unable to have our weekly science practicals because the distiller has been malfunctioning for nearly two years,” one spokesperson of the protesting students told Education Ministry officials who had been called in to deal with the situation.

“We have raised this issue but the school head, instead of looking at it, he responds by suspending some of the students. After the school head requested that our parents top up school fees to cater for our food, we are now having half-baked beans and porridge.”

Another learner said he is protesting because the school headmaster decided to paint the school wall in pink.

“This is a boys’ school not a girls high, the paint must represent boys and the school image,” he said.

According to the students, the deputy head and his relatives were camping in their hostels and must be removed.

“The school deputy head and his relatives have been staying in hostels yet student borders are failing to get accommodation. Hostels have been occupied by non-deserving members of staff and their relatives.

“To make matters worse, the clan is benefiting from borders’ food and other rations such as dish washer and soap,” said another learner.

Monday, officials from the Ministry of Primary and Secondary Education addressed the learners and assured them that their grievances will be addressed.