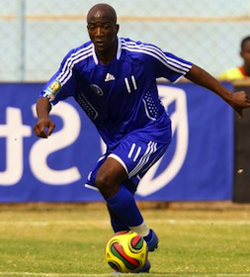 ZIMBABWE international striker Edward Sadomba has signed a two-year contract with Libyan side Ahly Tripoli, in a deal believed to be worth millions of dollars.
Sadomba, who was on the books of Al Ahly Benghazi last season, has had a successful career since joining the club in 2009.
He however, didn’t see much action in recent months as the league was suspended after civil war that broke out in the North African country.
The new league season was supposed to kick off in August, but fighting between rebel factions in the capital Tripoli and Benghazi made arrangements impossible, forcing the Zimbabwean forward to return home where he has been involved in charity work in the past few months.
But reports from Libya Tuesday said the 31-year-old, had signed a two-year deal with the Tripoli side reportedly running into millions of dollars. The Libyan league is expected to resume in January.
Several Sudanese journalists confirmed the development.
“Official . . . Zimbabwean striker Edward Sadomba has joined Libyan outfit Al Ahly Tripoli on a two-year deal,” Transfer News Central Africa website reported.
According to a Sudanese journalist Oluwada Lotfi, Sadomba could have been offered a lucrative deal by Tripoli.
“Chief Sadomba is already 31 so it’s understandable to see him chasing some big contracts now.
“Sadomba could have got a far, far bigger career with better choice but this was his destiny written by God,” wrote Lotfi on his Twitter account.
The former Dynamos winger, winner of the Golden Boot in the 2011 African Champions League and the 2012 African Confederations Cup, appeared in a Twitter picture posing with Ahly Tripoli officials.
This is not the first time that Ahly Tripoli had tried to sign the highly rated striker.
Three years ago, Tripoli offered Sadomba $350,000, minus salary, for a six-month loan contract which the striker turned down – an amount that easily translates to $1 400 000 for the current deal.
Last year while with Benghazi, Sadomba spent six months on loan at Pro-League side Kalba in the United Arab Emirates, in another money spinning deal.
He reportedly earned $400,000 during his short spell in Dubai.
Sadomba won the Caf Champions League Golden Boot in 2011 and Caf confederations Golden Boot in 2012 while playing for Sudanese giants Al Hilal.Advertisement