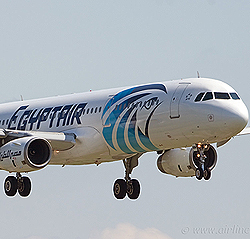 ZIMBABWEAN air passengers will now get a service linking them to east and north Africa.

Egypt Air will re-launch flight services to Zimbabwe after a nine year absence from the route.

The tourism ministry said the timing is strategic ahead of the UN World Tourism Organisation to be held in August.

The airline will begin the flights in June. They will run four flights between Harare and Cairo, via Dar es Salaam.
Egypt Air currently serves 19 destinations on the continent and it said the new route is part of its plans to enhance its presence.
Egypt Air country manager Hamdy Elghaffar said: “With the operation of four weekly flights between Harare and Cairo starting on June 1, 2013, Egypt Air will increase its points in Africa to 19 destinations in addition to five more destinations via its code-share agreements.
“Egypt Air customers in Harare will be able to connect to the world’s top destination in Middle East , Europe, Far East and North, Mid and South America.”
Transport Secretary Munesu Munodawafa added: “Naturally, the return of Egypt Air comes at the right time, which signifies the improvement of the country’s connectivity.”Advertisement