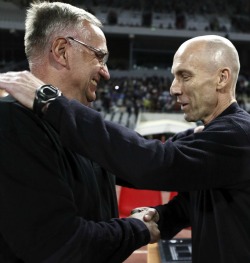 BOB Bradley’s Egypt is closing in on cementing a place in the final round of qualifying for the 2014 FIFA World Cup, but the former U.S. national team coach expects Zimbabwe to pose a big challenge in the next clash on the road to Brazil.
Egypt holds a five-point lead atop Group G with three games remaining and plays at Zimbabwe Sunday with a chance to pull closer to the Africa’s final playoff round. That game will be followed by another road test at Mozambique before returning home in September for the group finale against Guinea.
A win combined with a Guinea draw or loss to Mozambique on Sunday would clinch first place and a spot in the next round, where five teams qualify for the World Cup. Egypt is seeking its first place on the world’s grand stage since 1990.
Zimbabwe almost snatched victory in the reverse fixture in Alexandria. The game went down to the wire with both side having chances, and the Pharaohs needed a late Mohamed Aboutreika penalty to clinch a 2-1 win.
“We expect a difficult game,” Bradley told Goal.
“I realized Zimbabwe are a good side when we played them in Alexandria. They might be at the bottom of our group, but we feel they are a strong team which is well coached, so we do not have to underrate them. However, we have confidence in our team and want to win. We are looking forward to the game.”
Although Bradley was not impressed by his side’s showing in Tuesday night’s 1-1 friendly draw with Botswana, he believes Egypt would be strong against Zimbabwe.
“The Botswana friendly gave us a chance to look at some new players. We did not play well but we will improve against Zimbabwe,” Bradley said.
“We need to win this match. That is why we have picked a good team with a strong mentality. The squad has been together for over a year and that is an advantage, because the players have gelled.”
After the Botswana friendly, Bradley dropped defenders Ali Ghazal and Hazem Emam of Zamalek as well as midfielder Tareq Hamed and Ayman Hefny.Advertisement