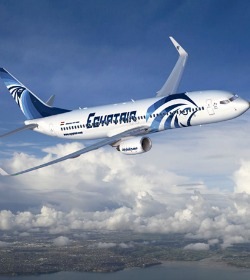 EGYPTAIR, the flag carrier of Egypt, announced that it will launch a new service between Harare and Cairo in June, helping link the country with the middle and Far East as well as Europe.
The airline said a Boeing 737-900 will fly into Harare, via Dar es Salaam, Tanzania at the beginning of June, marking a return to Zimbabwe some nine years after quitting the country.
“This new service comes as a part of EGYPTAIR network expansion plan which enhances EGYPTAIR presence as a main gateway to the world” said Captain Roshdy Zakaria, the Chairman and CEO of the airline.
He added: “With the operation of 4 weekly flights between Harare and Cairo starting June 2013, EGYPTAIR will increase its points in Africa to 19 destinations in addition to 5 more destinations via its code-share agreements”.
The B737-800 aircraft features 24 business class seats and 120 in economy configuration.
Egyptair was among a host of regional and international carriers to quit Zimbabwe in the last decade as the country battled a serious economic and political crisis.
But a coalition administration which assumed office after violent but inconclusive elections has helped ease political tensions and force the economy back on the path to recovery.
The improvement has seen several global and regional carriers returning to the country, among them Emirates Airlines and KLM of the Netherlands.Advertisement