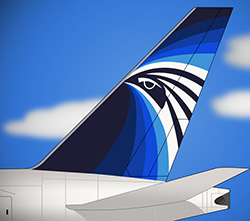 EGYPTAIR, which suspended its flights to Harare last month citing viability challenges, is set to review its decision and resume the flights around next month, ambassador Bassem Khalil said Monday.
He told Xinhua that a delegation from the airline was expected in Zimbabwe this week to thrash out issues affecting the viability of the airline.
Cancellation of the flights came just slightly more than a year after the airline resumed its flights to Harare in June last year after a nine-year hiatus.
“We had temporarily suspended the flights on the 24th of September but we have a delegation from Egypt coming this week and we hope there would be an agreement signed with the Zimbabwean side here so that we can have Egyptair fly again to Harare probably by the end of November or beginning of December,” Khalil said.
He said the airline’s profitability on the route had been affected by a decision by the Tanzanian authorities not to allow Egyptair to pick up passengers at Dar es Salaam International Airport.
At the time of its operations, the airline flew from Egypt to Harare via Dar es Salaam, Tanzania.
“The Tanzanian authorities did not allow Egyptair to take passengers from Dar es Salaam to Harare or vice versa from Harare to Dar es Salaam so the revenues of the flight went down.
“We are now making an agreement with the Zimbabwean side so that they are given the right to carry passengers from Harare to Dar es Salaam and this will help to improve their revenue,” he said.
Permanent secretary in the Ministry of Transport Munesu Munodawafa confirmed the Zimbabwe government’s efforts to woo back the airline by incentivizing it.
“The Civil Aviation Authority of Zimbabwe and the National Handling Services have been talking to them (Egyptair) to see how they can assist them so that they stay,” he said.
The pullout by Egyptair last month came just a few days before KLM Royal Dutch Airline pulled out on Oct. 1 this year, also citing viability challenges.
Zimbabwe is trying to woo back airlines which had left during the decade of the economic decline which ended in 2008.
Currently, 17 foreign airlines are landing at the Harare international Airport, down from a peak of 45 before 2000.Advertisement