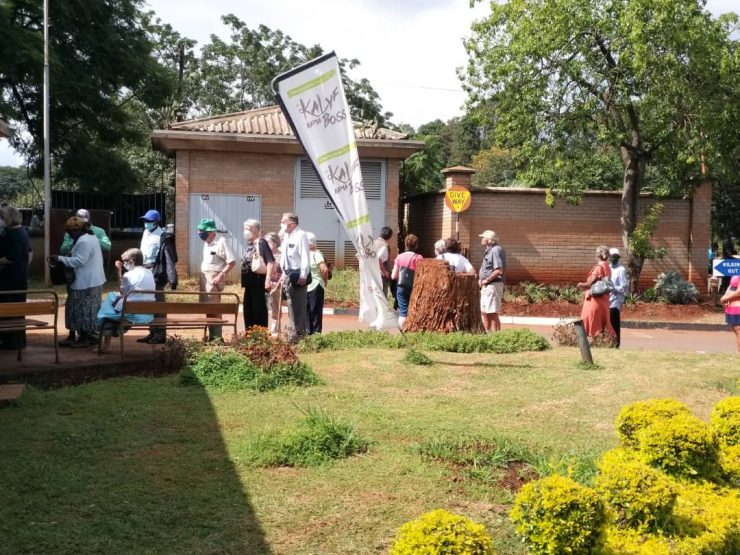 WHILE younger generations remain suspicious, growing numbers of senior citizens are taking up the jab.

They may be old, frail, and vulnerable but they are the foot soldiers at the front of Zimbabwe’s Covid vaccination drive. Amid widespread scepticism among the younger population, it is elderly people who are coming out to lead by example.

The queues at the vaccination centres in the capital, Harare, are dominated by older people. At Wilkins Hospital, Felda Mupemhi, 85, grasps her walking stick as she trudges toward a white tent, where nurses are administering the Sinopharm vaccine.

“We stand a chance of beating Covid-19 if we take this vaccine. So, I came here to make a statement to the younger [generation] that they too can get vaccinated, so that we save others,” says Mupemhi.

There were worries the vaccine might cause her health complications but after a short assessment interview with a health worker, she received her first dose of the Sinopharm vaccine.

I came here to make a statement to younger people that they too should be vaccinated Mupemhi says initially she had been sceptical: “I had already dismissed prospects of getting this vaccine. I feared it would trigger some health issues, as I am not young. But after seeing that my neighbour, who is my age, was still OK a week after getting it, that gave me the courage.”

Peter Hadingham, 82, was initially turned away when health officials cited his age and asthma as possible risk factors, but a few weeks later he was thrilled to be accepted for his first dose.

“I have a bit of asthma and a bad back, so I cannot walk straight, but otherwise I am healthy. I have a flu vaccine every year, there is no difference. [People] should think of the rest of the population – they should get vaccinated, because there is nothing to be afraid of,” Hadingham says.

Health officials have recorded growing numbers of senior citizens getting the Sinopharm and the Sinovac vaccine as Zimbabweans begin to soften their attitudes towards the Chinese jab.

“The uptake from last week is very encouraging. The elderly are coming, and those with chronic diseases have also been visiting our centres in large numbers,” Harare city health department director Dr Prosper Chonzi told the Guardian.

“Our older population appreciates that they are vulnerable. Once you get the infection, chances of severity are high, so they are jumping at the opportunity. If you are given the offer of getting the vaccine, and it is free, it is wise to take it,” he says.

President Emmerson Mnangagwa launched the second phase of the country’s vaccination rollout on 24 March, covering people with pre-existing conditions, the elderly and those confined to settlements and institutions, such as prisons and refugee camps.

Zimbabwe’s economy was precarious before the pandemic, and has been hit very hard by Covid lockdowns; in March the World Food Programme reported that food insecurity, particularly among the urban poor, is soaring. Food prices in February were 35% higher than the same month in 2020.

Parirenyatwa Hospital, one of the biggest in the country, was overwhelmed by Covid patients at the peak of the pandemic, just after Christmas. Now its stressed health professionals are working their way through the long vaccination queue, a stark contrast to the low numbers who showed up during the first phase of the programme. By 29 March, about 69, 751 Zimbabweans had been vaccinated, up from 43,295 people the week before.

The government plans to inoculate 60% of its population to achieve herd immunity, about 10 million people, and has received nearly two million doses of vaccines from China, while India donated 35,000 doses of the Covaxin at the start of April.

Health officials say there was initial scepticism about the efficacy of the Sinopharm vaccine, said by the government to be between 65% to 70% effective. Low uptake was also recorded among frontline health workers during the first phase of the rollout, despite efforts by doctors to encourage uptake on social media.

At a Harare vaccination centre, Malcom Michelle, 65, has been queueing for an hour, and is not happy about the lack of social distancing.

“There is need for more vaccination centres to open. As you can see, there is hardly any social distancing here. Apart from that, we just must go with the flow,” Michelle says.

According to Harare city council, which runs satellite clinics around the city, 24 vaccination centres have been set up, but people still prefer to go to the major referral centres such as Parirenyatwa, meaning longer queues.

Sean Moyo, 41, is frustrated by the slow pace of the process. “The experience was horrible; I was here at 8am but I got my vaccine at 12pm. I do not know why the queue is not moving. I know of several people who left without being vaccinated. I’m asthmatic, so I feared that I would get Covid. But thankfully I managed to do all I can to stay safe,” Moyo says.

Elizabeth James, 61, has been struggling to eke out a living during the pandemic. She says: “The vaccine is good for some of us who have underlying health issues, like diabetes and hypertension.”

James hopes that the vaccination programme will enable the country to return to normalcy, as long periods of lockdown continue to impoverish millions of informal workers forced to stay home without an income.

“When we were younger, we used to drink herbs [because] there were no such things as vaccines, but we appreciate the efforts by government to get us a vaccine, if it is safe,” she says.