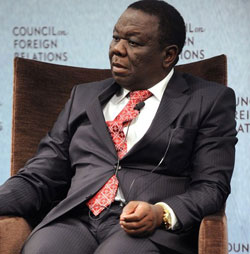 THE 2013 elections were endorsed by SADC and the AU. There was no strong condemnation of the polls by the West; in fact soon afterwards, the EU moved even closer and has now resumed direct financial support to the Government of Zimbabwe. If the 2018 elections are held under similar conditions, as is most likely, nothing is expected to change in the response of both the African and the Western communities.
The foregoing reality is useful in contextualising Morgan Tsvangirai’s party’s decision to boycott all future elections unless outstanding reforms are implemented. The nature of authoritarian regimes is such that they do not voluntarily democratise themselves out of power, and that is the central fallacy in the MDC’s current position on elections.
The question will hover back to what the MDC is prepared to do to force through these reforms. So far they have not outlined their strategy for achieving them, but the options are limited anyway and we can take a quick look at them now. The first option is for the MDC to withdraw totally from government and force Zimbabwe back onto the agenda of SADC and the AU and refocus international attention on the illegitimacy of an exclusive Zanu PF government.
President Robert Mugabe’s seniority in the pantheon of African liberation has shielded him from censure by other African leaders, but his successor will be more vulnerable. If no reforms are implemented before the 2018 elections, the MDC can perhaps hope that any government that arises from disputed elections will find it difficult to forge ahead, especially without having implemented the provisions of the new constitution.
This latter aspect forms the key line of challenge for any successor government to the current one, and western re-engagement is also likely to stall on that basis. However, both the Zimbabwean government and the national economy have mustered the grit to muddle through, somehow, as they did through the roughest years of 2007-8. The economy will not collapse since it’s actually growing, though marginally; nor will that legitimacy-challenged government simply crumble and faint.
There are clear limits to what regional and international diplomacy can achieve. And so a post-Mugabe Zanu PF government, especially one led by unpopular but determined power go-getters, as they have indeed proved themselves to be thus far, could ride that storm and continue to rule until the next elections in 2023.Advertisement

They can decide to implement measured reforms after first securing a fresh five years of uninterrupted rule in 2018 to try and release the pressure for reform and also continue the re-engagement with Western institutions, such as the SMP with the IMF which is on course and is working to the relative satisfaction of the Bretton Woods institution.
The post-2018 government could also take difficult decisions such as slashing the public service and gain even further traction with the West. They could push through key infrastructural programmes to improve such utility provision as water and energy, both of which are likely, should the so-called mega deals go from signed agreements through to delivery.
In short, competent pragmatism could trump liberal democratic reform, so there is scope to see such a government forge ahead. It would be a mistake for the MDC to think that any government after Mugabe that does not include them would be dead in the water. Meanwhile, the opposition will face the challenge of staying together and staying relevant till 2023 – and unless Tsvangirai is Abdoulaye Wade of Senegal whose lifetime in opposition ended with a two term presidency, that would surely mark his end.
The other option is for the MDC to force through reforms by engaging in mass action. Unless there has been an evolution in the Zimbabwean psyche, there will be little sustained support for indefinite mass action. Secondly, the MDC’s history with mass action is unequal to the lofty goals they have always set. Most notable in this regard is the so called Final Push that sought to challenge the outcome of the 2002 presidential election.
In short, not only is this option unlikely to succeed, it is also unlikely to take off! Notice how Tsvangirai has talked up rolling out mass action since last year but has done nothing nearly a year later. Even Dzamara’s abduction failed to spark popular uprisings – the MDC leader’s only response was to visit the barbershop from which Dzamara was abducted! I am willing to bet my last dollar that he will not do it.
I would be interested to hear what others believe are the options before the MDC in the wake of their election boycott. My own position is as I’ve said elsewhere: dogged participation in the electoral process along the lines of Alfred Stepan’s thesis on eroding an authoritarian regime.
Every electoral contest is an opportunity to raise the costs of authoritarianism, guard zones of autonomy through contesting the by-elections and keeping Zanu PF from the towns and cities, and illustrate the system’s ills. Eroding something isn’t the same as exploding it – and in taking down a long established authoritarian order such as Zanu PF’s it requires a sustained erosion of the system rather than a quick explosion of the same. The last 15 years of the MDC’s struggle bear testimony to that.
They must continue with the same deliberate, fully engaged and dogged strategy of taking on the regime at every electoral opportunity. I don’t see how anything else is likely to succeed.