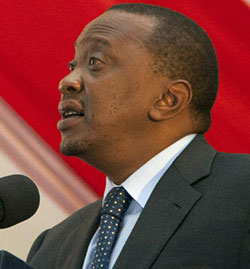 THE multi-party systems established in Kenya, Tanzania and Zambia in the early 1990s have endured despite electoral violence. But democratic hopes have been dashed or perverted throughout the rest of the region. The governments built on the ruins of the civil wars in Angola, Burundi, the Congo, the Democratic Republic of the Congo (DRC), Uganda and Rwanda have all relied on armed political groups to stay in power.
From June 2015 to August 2017 an uninterrupted series of general elections took place in Central and East Africa. Those in Burundi (2015) and the DRC (initially set for 2016) were expected to be the most problematic. In both the incumbent presidents were seeking to extend their mandates beyond a second term. In the Congo, Uganda and Kenya, the risk of violent clashes was palpable.
The ruling regimes were not only dated, but worse for wear. At the time of the elections, the presidents of Angola (José Eduardo Dos Santos), the Congo (Denis Sassou N’Guesso) and Uganda (Yoweri Museveni), all members of the revolutionary or progressive New Generation of African leaders, were all in their seventies and had been in power for 30 or more years. The Presidents of Rwanda (Paul Kagamé), the DRC (Joseph Kabila) and Burundi (Pierre Nkurunziza), having served terms of 21, 14 and 10 years respectively, took steps to change their countries’ constitution to seek a third term.
Despite the bleak regional outlook and contagious scepticism among voters, these pious “democratic” rituals have become critical events over the past 20 years. This is true even in the most authoritarian countries where so much is predetermined. From the parties in the running to the authorised candidates and even the results.Advertisement

As artificial as they may be, these rites still represent a risk for those in power. Rulers need expert skill to ensure both maximum control over their institutions and demonstrations of love from their people. Consequently, the outcome of the race – between increasingly artful electoral manipulation and limitless possible manifestations of democratic expression – is never entirely certain.
From Kinshasa to Kampala, from Brazzaville to Luanda and Bujumbura, courageous dissenters have organised numerous protests, usually with the approval – and sometimes active support – of the general population. These protests express the frustrations and expectations of a generation fed up with regimes clinging to power and responding to growing disillusion with increasing authoritarianism.
The ruling parties have, on the whole, proved themselves highly resourceful and resilient against the desire for change. Their victory has been comprehensive. Only Kenya is the exception: a second vote is set for October 26 following the Supreme Court’s surprise decision to invalidate the election results. In the DRC, Joseph Kabila’s delaying tactics have so far allowed him to remain in power. And while Dos Santos eventually withdrew his candidature due to illness, the election of his chosen successor has ensured power in Angola remains in his faction’s hands.
In power until 2034
The string of Central and East African elections got off to a bad start. In April 2015, the president of Burundi controversially sought a third term in office. Although devastated by 10 years of internal strife, Burundi had become a symbol of peaceful transition in the region. Three months of tactical manoeuvring and brutal repression were required to bring victory to the incumbent president. This pushed the country back to the brink of civil war and further plunged it down the ranks of the world’s poorest countries.
The resulting crisis and the violent response by this relatively inexperienced president threw discredit on other outgoing presidents in the region, all flagrant repeat offenders. They were forced to up their game.
In February 2016, Museveni took office for the fifth time in Uganda amid relative calm. In March, in a tenser national atmosphere, Congolese president Denis Sassou-Nguesso started on the first of the three extra terms allowed by the recent constitutional reform. He could still be in power in 2031, at nearly 90 years of age.
Not to be outdone, Rwandan President Paul Kagame presided over a constitutional referendum in 2015 enabling him to remain in power until 2034. The reform was approved by 98% of voters, with a voter turnout of more than 98%.
Overall, pending the outcomes in Kenya and DRC, each of the self-proclaimed candidates who won the recent bout of electoral contests can boast enviable popular mandates, and even landslide victories.
Every leader for themselves
In the eyes of these leaders their longevity, and that of their counterparts in the region, constitutes in and of itself a justification for remaining power.
Their relations, alliances and conflicts were carved out in a shared past, marked by civil wars and fiercely violent regional clashes. Widespread structural insecurity plagues the entire region as a result. The insecurity is fuelled by governments’ failure to lay down formal, mutually beneficial, political frameworks for cooperation and regional integration. Yet such frameworks would allow them to develop the human resources and agricultural and mining potential of the region in an equitable manner.
In 2013, as part of the UN peacekeeping mission in the DRC, African Intervention Brigades were authorised to take offensive measures to neutralise the main militia groups in the country’s Eastern region. The Brigades’ main target was the M23, a movement supported by Rwanda and Uganda, according to intelligence later submitted to the International Criminal Court (ICC). The return to low-scale warfare is a sign of a regulated joint governance of the instability.
Despite the presence of peacekeeping forces, numerous political and criminal armed groups still control vast, lawless zones. In their own ways, these groups secure the exploitation of natural resources. They supply a lucrative cross-border trade run at the highest levels of government. These activities bring in significant profits for the ruling classes. They also allow countries in the sub-region to export goods they do not produce themselves. And they ensure the continued viability of the various regional and international trade routes towards the Indian Ocean.
At every stage of wealth creation, profits are essentially redistributed according to private interests. It is therefore easy to understand why each head of state believes themselves best placed to serve both national and personal interests, and the interests of the political-ethnic groups they represent.
The price of longevity
When they came to power, the new generation of leaders from the Great Horn of Africa embodied the new ideal of “good governance”. They were “strong men” at the head of “strong and sustainable democracies”, ensuring the order and security necessary for development.
During the course of these elections, none of these so-called democrats, so regularly and resoundingly “elected” by their citizens, had any thoughts of retirement. Setting aside Kabila, whose fate is still undecided, at least two of them, in Burundi and Uganda, had no qualms about changing their country’s constitution to ensure their own reelection.
But in a region of considerable wealth, it’s by no means certain that government can indefinitely be determined by the life expectancy of leaders who are still incapable of developing the regional cooperative frameworks that would ensure peace, security and prosperity for their citizens.
Translated from the French by Alice Heathwood for Fast for Word.
André Guichaoua