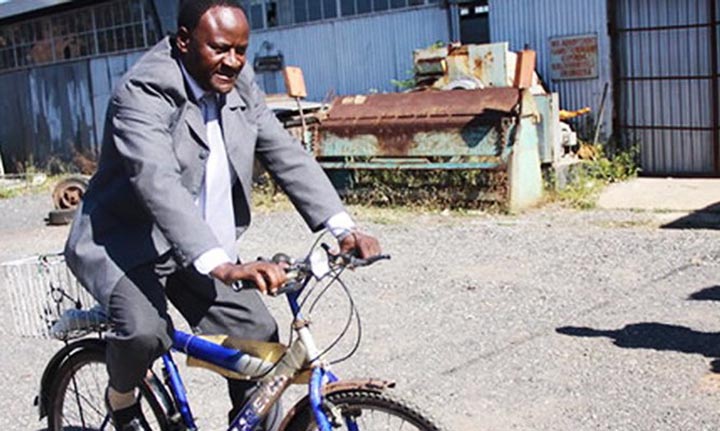 FORMER Kwekwe mayor Shadreck Tobaiwa who bounced back into council after the July 30 elections has been tipped to reclaim the city’s top job.

He would replace mayor Matenda Madzoke who lost council the elections to MDC Alliance’s Charles Juta.

Ironically, Madzoke took over the mayoralty from Tobaiwa five years back.

Meanwhile, the outgoing city father made history after he rejected a council offer of a top of the range vehicle which would have been part of his exit package.

Madzoke, who made history by cycling to work, insisted that the mayoral vehicle was not a priority and told council to channel money to service delivery vehicles.

“I don’t see myself as a politician; I am a civic leader,” Madzoke said.

Tobiawa said he was available to serve again, if called upon.

“If I am offered an opportunity to lead the people of Kwekwe I will once again lead them,” he said.

My re-election is about fulfilling the developmental agenda for the city of Kwekwe.”

The opposition MDC Alliance is dominating Kwekwe City Council after it took thirteen seats of the available fourteen.

MDC Alliance Midlands North chairperson Sedwell Bhebhe said the party has received curriculum vitaes of the mayoral aspirants in Kwekwe and Redcliff where the coalition also made a clean sweep of all the wards.

“We have received CVs for those who are aspiring to be mayors in Kwekwe and Redcliff,” he said.

“We have set minimum requirements of those who want to be at the top post.

“We also have other attributes which we are considering as a party.”

Sources however told this publication that Tobaiwa was most likely to land the Kwekwe post.

He will be challenged by two female candidates in ward 5 councillor Melody Chingarande and ward 10’s Angeline Kasipo who have also submitted their CVs.

Meanwhile, in Redcliff outgoing deputy mayor Vincent Masiiwa has also submitted his CV for the mayoral post, it has been gathered.

Sources have said Masiiwa is favourite to land the post.

Contacted for comment Masiiwa said he would be humbled to serve Redcliff but insisted that the party has the final say.

“I would be humbled to serve Redcliff, but the party has the final say in that matter,” he said.