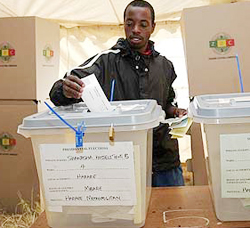 IT IS said that anyone can be a democrat in victory; the true test of a democrat comes with defeat. As Zimbabwe moves towards elections, a lot of comments have been flying about on proportional representation generating more heat than light.
Almost five years ago, Zanu PF and the two MDC formations signed the Global Political Agreement (GPA) mediated by SADC. A major purpose of this GPA was to look forward and begin a process in which Zimbabwe would not have elections that are not disputed. The GPA sought to deal with the problem of political legitimacy and prepare the ground for an agreed and acceptable election process.
A lot of comments and scepticism can be expressed about whether in fact what is happening in Zimbabwe is an acceptable election process, what cannot be doubted however is the fact that one of the key deliverables of the GPA was a new constitution.
On March 16, 2013, over 3 million Zimbabweans voted YES in support of the proposed basic law of the land. The harmonised elections on July 31 will be conducted according to the new constitution which introduces proportional representation. This changes the way National Assembly members and provincial councils are elected. A look at the electoral system that will be in use is important.
Overview of election at national level
The President has to be elected by a margin of at least 50% plus one vote, anything less than that necessitates a run-off between the two candidates with the highest number of votes. The National Assembly will have 271 members of which 210 are constituency representatives elected through a first-past-the-post system plus the 60 women – six from each of Zimbabwe’s ten provinces – who will come from the party lists through proportional representation. The 270 National Assembly members will then elect the Speaker from their members or from outside the National Assembly.
The Senate will have 81 members broken down as follows:

# 16 chiefs, two from each of the eight non-metropolitan provinces elected by the provincial assembly of chiefs

Under the new constitution, three different categories of representatives will come through proportional representation.

# 80 members 10 from each provincial council (Non-Metropolitan)

# 60 seats in the National Assembly reserved for women, six seats each from 10 provinces.
The reservation of these seats is only for the first10 years after which it will fall away. This also means that every vote cast for the National Assembly seats is equal to four votes. It is a vote for the constituency candidate; it is also a vote for any one of the six senators in the province as well as a vote for the six women candidates per province and finally a vote for any one of the ten councillors in the provincial assemblies (non-metropolitan).
The party lists for the Senate and provincial council elections will follow what is called a Zebra format — female and male alternately headed by female.
Method of allocating Proportional Representation
How proportional representation will be allocated can be seen if we take an example of a province with three constituencies X, Y and Z. What would happen is that the contesting parties are listed on a table starting with the party with most votes.

A quota is determined through dividing total number of votes cast for participating parties (236,634 ) by total number of seats (6) and this translates to 236 634  divided by 6 equals 39,439 (quota).
The number of votes cast for each political party is divided by the quota to determine number of seats to be provisionally allocated to each party and to ascertain votes which remain unallocated. So for example the total of party A (89,349) is divided by the quota 39,439 which equals two (seats) remainder 10,471 unallocated votes. So in the provisional allocation of seats a total of four seats are then allocated as shown in the table below:

For party A this means 89 349 divided by 23 663 equals 3 remainder 18 360. The remaining three seats go to the three parties with the highest number of unallocated votes.

Advantages
Easy voting: In terms of the actual voting this is fairly simple for voters who in the 2008 harmonised elections had to cast three separate votes in one polling station. Doubtful though whether voters will know that a vote for a constituency candidate means the vote will be counted in three other elections.
Mixed system in National Assembly: advantage of first past the post combines with that of proportional representation. The 210 first-past-the-post National assembly members maintain links with constituencies while 60 women party list allow even smaller parties some representation.
Women better represented: There will be at least 60 women members of Assembly. At least 50% of elected senators will be women since party lists because of the Zebra method. The same is true of each provincial council.
By-elections reduced: This will reduce by elections for those members who come through proportional representation since if a party member vacates or dies the party suffering the loss appoints the next candidate on the party list.
Disadvantages
Limited choice: Voters lose the right to choose for the different positions. You may like a party’s candidate for the National Assembly but not their candidate for Senate. You have no choice but to vote for that candidate as well or else forgo voting altogether.
Marginalisation of independent candidates: Independent candidates for senate and provincial councils are not allowed as candidates are based on party lists. Independents can only gain a seat at National Assembly and in local authority councils.
There is also the added difficult that voters will know that by voting for Independent candidates in the National Assembly, they are foregoing their right to select extra women in the National Assembly and members of Provincial councils.
Marginalisation of Women: The reservation of 60 seats in the National Assembly is a double edged sword because parties may then tend to put forward men as candidates for National Assembly arguing that women are already catered for in the 60 reserved seats.
Parties become too powerful: A party list system gives unwieldy powers to political parties and actually encourages the system of patronage as loyalty will be given to those who are in charge of preparing the party list.
Elections are about making choices on who should govern. Who should rule and under what electoral arrangements? Whether these choices are free and fair is not just a matter of electoral systems. However good an electoral system is, it cannot alone act as a brake on the arbitrary exercise of power. To be sure systems, institutions and laws matter, but what is needed is a combination of good leadership, good institutions and a watchful and skeptical citizenry.
Percy Makombe is a development consultant based in Johannesburg, South Africa. This article was  written using notes from Zimbabwe’s new Constitution, Statutory Instrument 85/2013 – the Presidential Powers (Temporary Measures) (Amendment of Electoral Act), Veritas and the Zimbabwe Electoral Support Network