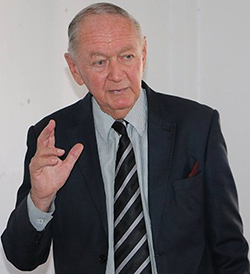 AN opposition legislator has urged government to introduce another levy on electronic cash transfers saying this would help address the problem of taxing the country’s vendor economy.
MDC-T’s Bulawayo South MP Eddie Cross said this while presenting recommendations by Parliament’s Finance Committee during a debate on the 2018 budget this Tuesday.
An economic crisis that has lasted nearly two decades saw the collapse of industry and reduction of formal employment to around 10 percent, according to non-government estimates.
Most economic activity is now in the informal sector which has proved difficult to tax resulting in government revenues remaining constrained.
However, Cross said another levy on electronic money transfers which have become the dominant transacting method due to cash shortages could help government tax the nburgeoning informal sector.
“I believe that we can cover the shortfall in our revenues,” he told finance minister Patrick Chinamasa.
“We can provide more money for our health sector, we can fund the Parliament of Zimbabwe properly if we put a small tax on electronic transfers. If we put 5 percent, five cents in a dollar on that, it is $9 billion of new revenue.”
Cross said with the total value of electronic transfers in 2017 at $180 billion, Chinamasa should find ways of sweating something out of online transactions whose figures point to a Gross Domestic Product (GDP) “more than double” the $19 billion estimated for 2018.
“The honourable minister estimates that our GDP is $19 billion in 2018 but the total value of swipe transactions in 2017 was $76 billion and the total value of RTGs transactions, about $50 billion and if you add that, the total value of transactions through systems like EcoCash, which constitutes another $1 billion a week,” said Cross.
He added, “His (Chinamasa’s) figure only reflects the value of the formal sector, but if you add the informal sector trading into our national economy, we probably have an economy in excess of $40 billion.”
However, with Zimbabwe already counted among the countries with high tax regimes, Cross admitted that members of his committee have been sceptical about his proposal.
Even so, he is adamant that the levy would “solve our problems overnight”.
“I have spoken to our committee and it is sceptical and has urged me to make sure that this matter is raised in the committee in the next month or so,” he said.Advertisement

“However, I think this is an urgent matter because we must resolve this question of our deficit and the only way to resolve it is to tax the people in the informal sector. If you put a tax on electronic transfers, it is easy and cheap to collect and everybody pays.
“If you step into an emergency transport taxi and you pay your fare using EcoCash, you pay five cents to the minister of finance.
“It will reduce expenditure on labour and salaries to 35% of our budget; it would eliminate our deficit immediately and give us resources to settle our bill with the multinational agencies.”