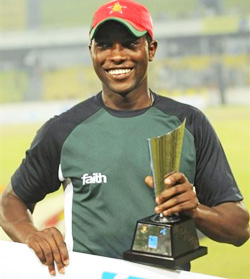 ELTON CHIGUMBURA stepped down as Zimbabwe captain shortly after leading his team to an 18-run win that helped them level the four-match T20I series against Bangladesh in Khulna.
Chigumbura, who ends his second stint as captain, reiterated his commitment to keep playing for Zimbabwe, but said the time was right for someone else to take over as captain. “I have enjoyed the challenges that came with leading the team,” he said. “Now I feel it’s the best time to leave it to the next guy to lead us so I can focus on my game as a player. I am sure I will lead from the front as a senior player as I still believe I have more years of playing in me and of winning games for the team.”
Chigumbura captained Zimbabwe in 80 limited-overs matches, winning 20 of them. He famously led them to ODI wins over Australia and New Zealand at home in 2014 and 2015 respectively. In May 2015, he led Zimbabwe on a limited-overs tour of Pakistan that marked the return of international cricket in the country after a gap of six years. On a personal note, he brought up his maiden ODI century on the tour.
Chigumbura’s first stint as captain lasted a year after he took over in May 2010. Four years later, he took over the limited-overs teams while Brendan Taylor was retained as Test captain. Taylor’s retirement following a Kolpak deal with Nottinghamshire meant the leadership mantle fell back on Chigumbura. Now he resigns after 11 months in charge.
Zimbabwe Cricket is yet to name a replacement. The team’s next assignment is likely to be a short limited-overs tour of West Indies in February ahead of the World T20 in India.Advertisement