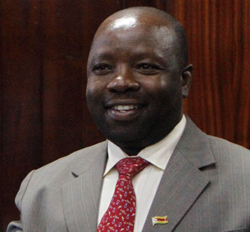 MUNYARADZI Kereke, the local representative of a shadowy prospective Tetrad Investment Bank investor on Wednesday met and assured restive creditors that a deal to rescue the financial institution was being finalised with government.
Kereke is representing the Horizon Capital Consortium which is reportedly made up of Russian Sergey Pokusaev, the Zimbabwe government and some unnamed locals and has proposed to inject about $150 million into the troubled bank.
He said the investor was willing to inject the money into the bank but was taken aback by the recommendation of the provisional judicial manager, Winsley Militala to liquidate the institution.
Tetrad management and Militala have been trading accusations in the press over the judicial manager’s report, which recommended liquidation citing the absence of the proposed investor.
“We showed the judicial manager (Winsely Militala) documents from government that the transaction was being considered at various levels in government,” said Kereke.
“A general agreement between the government and the investor has already been reached.”
Although government’s involvement and interest in the deal remains unclear, Kereke said the investor had a financial instrument to buy shares of the bank and was currently conducting due diligence.
Pressed to give details about the deal so that creditors could make informed decisions, Kereke said government was “exuberant” about the deal and that its finalization would take time due to regulatory and other requirements that needed to be fulfilled.
He added that he could not provide further details on Pokusaev for fear of jeopardizing the deal.
No details on investor
“There is an explicit agreement of sale between government and the investor. I am not at liberty to disclose the name, identity and contact for obvious reasons.
“It’s a transaction between Horizon and shareholders,” he said, adding that there had been communication between government, shareholders and the investor.
Earlier on, Militala told the meeting that the bank whose total assets are worth $42,7 million and had liabilities of $70 million and recommended that it should be liquidated.
“It is my own view that though appealing, the HCC deal has national interest enshrined in it, however without capital, the bank should be liquidated,” he said.Advertisement

He said the bank’s money had been misappropriated and that there was need for further investigation.
“Footprints are there, money left the bank going to a particular house, if I knock and the door is opened, I cannot remove the asset from the home,” he said.
He said despite threats and intimidation he was going to stay put and accused management of approving loans without collateral.
“I am not resigning from Tetrad. I have a mandate and I am proceeding forthwith, taking and securing the assets,” said Militala.
On claims by Tetrad directors that he was reluctant to meet Horizon, Militala said: “That is not correct, Horizon communicated to me about meeting with the principals in government.”
“The onus is on the shareholders to bring Horizon to the table since no one knows much about Horizon except the shareholders,” he said, adding that his letter requesting to meet with the investor had not been responded to.
“Since the deal had taken for ever to consummate, the bank can be pulled out of liquidation if investor is serious,” he added.
The decision on whether to liquidate the bank or place it under final judicial management would be made by a High Court judge on May 7.
The Reserve Bank of Zimbabwe and the Deposit Protection Corporation will also be updated on the outcome of the meeting of creditors meeting as they are interested parties.