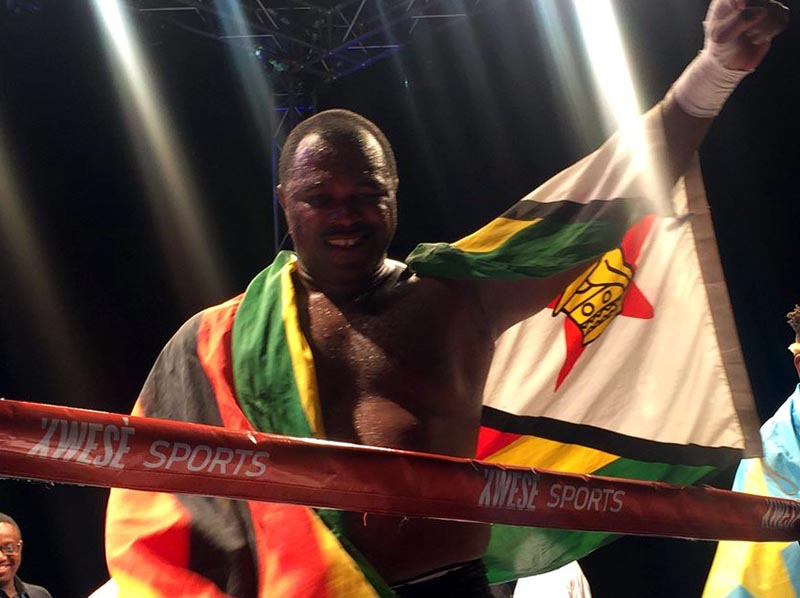 ZIMBABWEAN heavyweight boxer Elvis Moyo has been rewarded for his recent run of brilliant form after being offered an opportunity to fight Commonwealth heavyweight champion Joe Joyce in a high profile non-title fight to be held in the United Kingdom in June.

The 34-year-old World Boxing Association (WBA) Pan African heavyweight title holder, who is nicknamed the “Bulawayo Bomber”, revealed the offer in an interview with NewZimbabwe.com on Thursday.

Moyo said he was relishing the opportunity to fight abroad despite the limited time he will be given to prepare for the potentially explosive encounter, which was made possible by the WBF president Howard Goldberg.

“I’ve been offered a fight in England against Joe Joyce, but its 10 days’ notice and I am going… The fight should be in 12 days and I’m still waiting for finer details and visa process. The connection is done by Howard Goldberg the WBF president and it’s a chance I cannot let go despite the 10day notice,” Moyo said.

He added: “I have to do it in short notice…they will make sure I travel 18hrs and fight two days later, that’s boxing politics but it’s and opportunity I can’t let go freely. Apparently, it was supposed to be commonwealth title, but it won’t since we’re not part of it.”

Last month Moyo delivered another huge statement in his bid for more lucrative fights in Europe with a convincing first round knockout of Ukrainian Mark Pedyura at the City Sports Centre in Harare.

The victory was Moyo’s fastest of his career and after the match he reiterated calls for a fight with Zimbabwe-born former British and Commonwealth heavyweight champion Dereck Chisora.

It was the second time in a space of few months that Moyo had called out Chisora as he did the same after defending his WBF All-Africa heavyweight title against Knife Didier of the DRC in February where he declared he could smash “Del Boy” into pieces.

While Chisora has snubbed Moyo’s challenge, describing him as a nonentity in boxing, the upcoming fight against Joyce is sure to get his attention.

Joyce, who has recently been linked with Chisora, is highly regarded in British boxing circles after a sterling amateur career in which he won silver and gold medals at the 2016 Rio Olympic Games and 2014 Commonwealth Games respectively among other continental and global accolades.

Joyce, who has won all his four professional fights so far via knockouts recently vowed to continue his “fast-track” through the heavyweight division after impressively winning the Commonwealth title.

The Olympic silver medallist broke a 106-year record by claiming that belt in just his fourth pro fight on May 5.