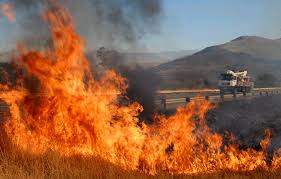 THE Environmental Management Agency (EMA) has urged the public not to start veld fires outside residential and business premises as the scale of damage could be dire during the current fire season.

The fire season stretches from July 31 to October 31.

In a statement, the organisation’s environmental education and publicity manager Amkela Sidange also urged the public to assist in the putting out wildfires.

“I plead with the public not to start fires unnecessarily during the fire season. Failure to comply will attract a fine or imprisonment or both.

“The veld is now dry and weather conditions are hot and windy, thus very conducive for veld fires to occur.

“Let’s prevent veld fires and protect lives, property and the environment,” she said.

“The dangers that veld fires pose to the environment include the destruction of ecosystems, fauna, flora and farming land.

“In the context of the environment, an ecosystem is viewed as a social-ecological unit that is stable and sustainable, maintaining its characteristic composition, organisation and function over time while remaining economically viable and sustaining human communities.

“Apart from affecting the natural environment, veld fires also impact on the human environment. Household assets, including livestock and capital assets are destroyed by veld fires.

“This hazard is also a threat to human life as it may result in death or injury. Veld fires deprive people of a clean environment by causing pollution.

“They pollute the environment in which people live, posing a serious health hazard through ash that can be blown, reducing the quality of air that people breathe,” said Sidange.

The official said the impact of veld fires needs to be dealt with in order to preserve and sustain the environment.

“Preventing veld fires may not be entirely possible, but there is a considerable scope to minimise the risk to life and property through effective management and mitigation strategies.

Sidange said her organisation was also working with communities to prevent the spread of veld fires and reduce associated losses.

Said Sidange, “As an agency, we are supporting communities around the country with equipment and technical expertise on biomass reduction to prevent veld fires.

“We are also increasing our awareness meetings and trainings to sensitise communities on veld fire prevention.

“All landowners and communities are reminded that it is a punishable offence to fail to put standard fire guards around land properties during the fire season.”

She said that the agency remains available to work with all citizens in the fight against veld fires.

Property worth $5,2 million was destroyed nationwide by veld fires and four fire related deaths were recorded during the 2019 fire season.

The Environmental Impact Assessment and Ecosystems Statutory Instrument 7 of 2007 states that, in Zimbabwe, no person is allowed to light a fire outside residential and commercial premises during the period July 31 to October 31 of each year.

Monitoring the trends related to the common causes of fire provides invaluable information that helps focus on fire prevention efforts.