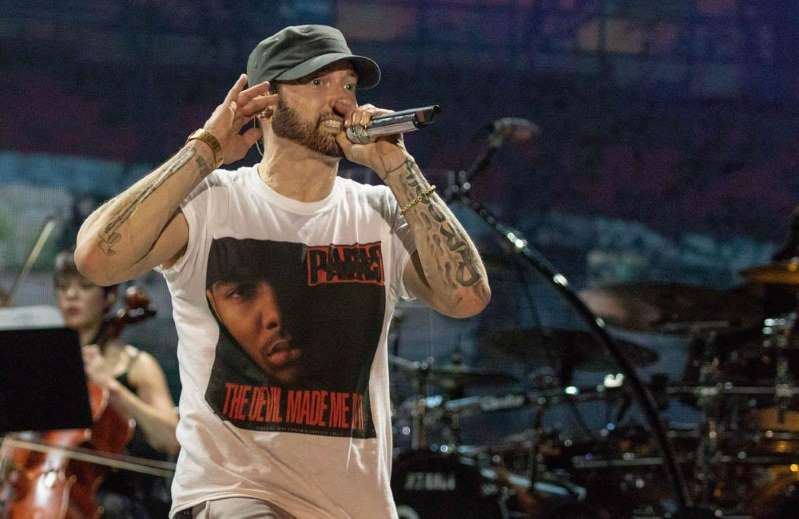 Eminem and Kanye West have topped Spotify’s list of the best workout songs.

The two rappers make up four of the top five songs to exercise too – found by using the platform’s streaming stats – with Slim Shady’s ‘Till I Collapse’ at number one for the third year in a row.

Kanye’s track ‘Stronger’ is third in the all time rankings, while his song ‘Power’ is also on the list, with ‘Can’t Hold Us’ by Macklemore & Ryan Lewis rounding off the top five.

The news comes after it was recently reported that ‘All Day’ hitmaker Kanye, 41, allegedly pulled out of a headline slot for Coachella 2019 because the staging was “artistically limiting”.

An insider told TMZ: “These 40×60 stages are so archaic. It’s the same type of stage on which Shakespeare’s works were performed hundreds of years ago.”

The ‘Halo’ hitmaker reunited with her Destiny’s Child bandmates Michelle Williams and Kelly Rowland to perform a show-stopping surprise medley during the singer’s headline slot – comprised of ‘Lose My Breath’, ‘Say My Name’ and ‘Soldier’ – for their first live performance together in three years.

This year, Ariana Grande, Tame Impala and Childish Gambino will top the bill at the Coachella Valley Music And Arts Festival.

Ariana is set to perform on both Sundays, Kevin and co on both Saturdays and Gambino will appear on both Fridays.

Sharing her excitement for the headline slot on Twitter, Ariana, 25, wrote: “Humbled and excited as hell Coachella. Thank u. (sic)”