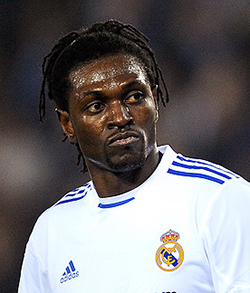 EMMANUEL Adebayor has launched another verbal attack on his family on Facebook, claiming that his brother Kola held a knife to his throat in an attempt to gain money from the Togolese striker.
The Tottenham Hotspur player has lifted the lid on his turbulent early life, giving his side of a tale of greed in candid, successive posts on Facebook.
Among the accusations in his first 877-word diatribe were that his mother was obsessed with money and brother Rotimi stole 21 mobile phones from a football academy Adebayor had helped him get into.
The second 1,041-word post included allegations that Rotimi stole football shirts that Adebayor had been given by the great Zinedine Zidane and the late Marc-Vivien Foé, the Cameroon international who died of a cardiac arrest during a match.
The rants on Facebook have alarmed Spurs, who fear they compromise manager Mauricio Pochettino’s chances of getting the 31-year-old’s £100,000-a-week salary off the wage bill this summer.
Adebayor claims that he his brothers Kola and Peter visited him while he was playing for Monaco and wanted money.
“I was very tired and decided to go take a nap” Adebayor writes.
“I woke up and a knife was held to my throat. As I opened my eyes, both of my brothers were there.
They were shouting and they claimed that I was wasting their time. Peter was going mad and Kola was supporting.
“I asked them: ‘Is this the only way to solve this issue? If yes, then kill me and take the money.’
Adebayor also reveals how much the family problems have weighed down on him.
“Many times I wanted to give up,” he writes. “Ask my sister Iyabo Adebayor how many times I have called and was ready to commit suicide.”
Here is Adebayor’s Facebook post in all its 1600-word glory:
SEA, if I decide to bring out the Part 3 today, it is because my brother @Kola Adebayor and my other siblings have decided to talk about our family issues on social medias, through letters to my club, radios…I could write an autobiography and sell it but I decided to share with you here.
25 years ago, my big older brother Kola went to Germany and he became the hope of our family. We all thought he could change the way we were living. Years after he left Togo, we still had no electricity and no phones. If he wanted to talk to us, he would call the Atlantic Hotel that was very close to our house. We would then run to the hotel reception and talk to him.Advertisement