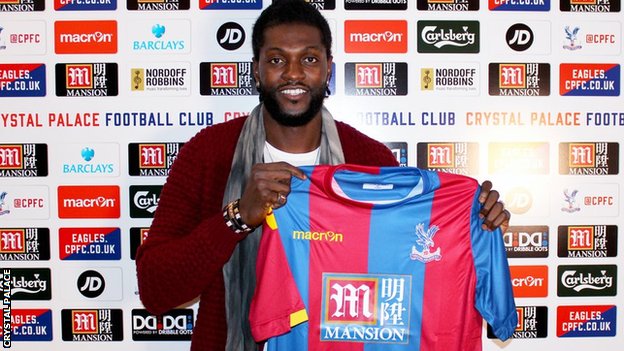 CRYSTAL Palace have signed striker Emmanuel Adebayor on a free transfer until the end of the season.
Adebayor, 31, was available after being released by Tottenham in September and has scored 94 Premier League goals for Spurs, Arsenal and Manchester City.
Two weeks ago, Palace boss Alan Pardew confirmed his interest in signing the Togo international.
Adebayor’s last appearance came on 3 May 2015, playing six minutes in Spurs’s 1-0 home defeat by Man City.
Palace are the third-joint lowest scorers in the league with 24 goals in 23 games this season, and lie 11th in the table.
Strikers Fraizer Campbell, Dwight Gayle, Connor Wickham and Marouane Chamakh have managed just one league goal between them so far.
The Eagles have failed to win their past six games, losing their last four in a row, and Adebayor is the club’s first signing of the transfer window.
Pardew made a failed attempt to sign the player in 2006 when he was in charge at West Ham.
Adebayor instead joined Arsenal from French club Monaco. He then went on to play for Manchester City followed by a loan spell at Real Madrid before joining Spurs in 2012.Advertisement