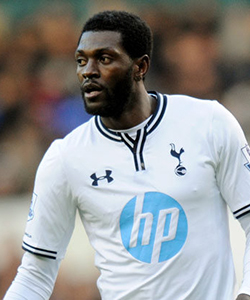 TOTTENHAM striker Emmanuel Adebayor will miss his club’s final game of the season at Everton on Sunday after being allowed to return to his native Togo on compassionate grounds.
Adebayor published the latest in a series of lengthy Facebook posts this week in which he revealed he had contemplated suicide due to a family feud.
And concerns over the player’s mind-set have prompted Spurs boss Mauricio Pochettino to step in on his behalf, Press Association Sport understands.
The 31-year-old, who has already been granted compassionate leave once this season, is also set to miss the club’s post-season tour of the Far East, and his future at the club must now be in doubt.
Adebayor has used his Facebook account three times to reveal his complicated family issues.
In his first post earlier this month, he accused his brother Rotimi of stealing mobile phones belonging to team-mates at a leading French football academy.
Adebayor’s third instalment on Wednesday was the most striking as he said arguments with his brothers Kola and Peter, who died in July 2012, drove him to consider taking his own life.
”Many times I wanted to give up,” Adebayor wrote.
“Ask my sister Iyabo Adebayor how many times I have called and was ready to commit suicide.
”I kept these stories for years. But if I die, no-one would know my story, no-one would learn from it.
“Some people say I should keep these stories private, but someone has to sacrifice himself, someone has to talk about it.”Advertisement