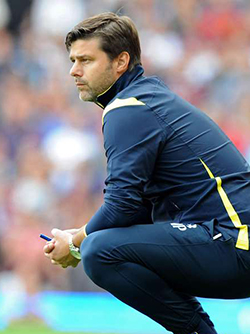 TOTTENHAM manager Mauricio Pochettino has told Emmanuel Adebayor he has no future at the club.
The Togo international rejected moves to Aston Villa and West Ham United in the recent transfer window and Pochettino told reporters on Friday that the striker, who has been left out of Tottenham’s Premier League and Europa League squads, was unlikely to play again.
The forward reportedly earns around £5million a year and is set to pick up his pay cheque despite playing no role in the team.
“I was very clear with him, we had a conversation before the end of last season and I explained my idea,” Pochettino said.
“I don’t need to explain much more, I think it is clear he is not in my idea, in my mind or in the plans for the future of Tottenham.
“In football it is about the present and tomorrow, it is not about yesterday.
“In football it all runs quick and changes every day, the more important thing is that I was clear with him and clear with the situation.”
Adebayor has also fallen out of favour with Togo coach Tom Saintfiet, who likened him to a bad date and said this week that the 31-year-old had failed to respond to a call-up for an African Nations Cup qualifier. Advertisement