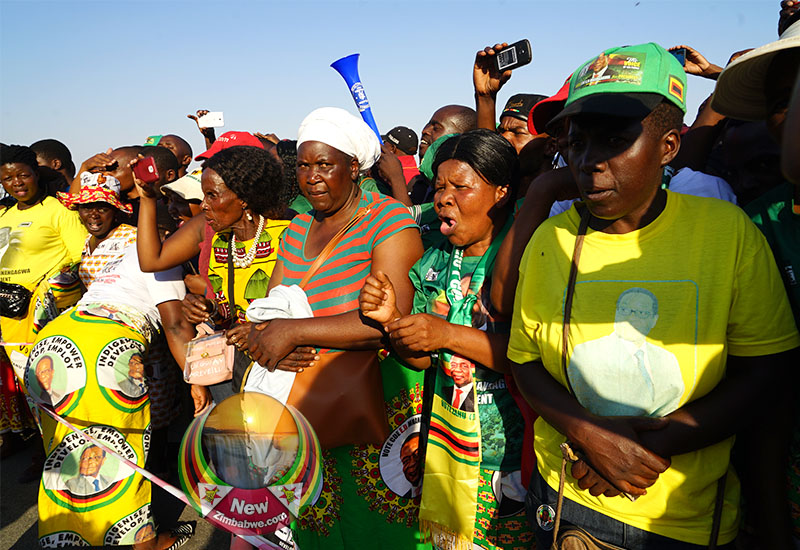 A NUMBER of those who thronged the Robert Gabriel Mugabe International Airport to witness the arrival of late former President Robert Mugabe could not control their emotions as they openly wept for the country’s founding leader.

Mugabe died in Singapore last Friday aged 95 and is set to be buried on Sunday.

Following his death over an undisclosed ailment, Zimbabweans have chosen to forget the transgressions that were visited upon them by the late leader’s regime and focussed on the positives he contributed towards the country’s independence back in the 1960s and 1970s.

“I am grieving for this man,” said one youth.

“Atleast he left us somewhere. I do not think we will forget what he did for us as a nation and youths in particular. We will never forget him. We are mourning our hero,” said a youth.

As Mugabe’s body arrived, some women broke into chants, “Gushungo! Gushungo! Gushungo! (Mugabe’s totem) as his Zimbabwean flag draped coffin was being taken from the government chartered plane which brought his body home.

“I am a landlord because of Mugabe. Everyone makes mistakes but we appreciate the good works that he did for us,” said a young woman.

Another youth added, “I am mourning and celebrating at the same time. Robert Mugabe is a man to remember and we were saddened by his sudden death. He was protecting our natural resources.

“Mugabe taught us to use our own hands to fend for ourselves. He taught us to work hard. I thought that maybe he would teach our new leaders how to carry on forward without him but all of a sudden he leaves us. We are in tears and we shall remain faithful to what he taught us.”

Another Zanu PF supporter who was putting on party regalia said she was pained by that Mugabe died before she could satisfy a lifetime dream of meeting him personally.

“We love you Cde Bob. We thank you for everything you gave to us. You were our Hero, Our Icon. It is so painful that you have just left us. We love you with all our hearts until we meet again. Rest in Peace! We have houses; we have farms all because of you,” she said as she broke into tears.

Mugabe’s body was set to lie in State at his residence in Borrowdale, Harare Wednesday night.

It will be taken to Rufaro Stadium in Mbare this Thursday to give Zimbabweans an opportunity to pay their last respects to one of the longest serving leaders in the world who ruled Zimbabwe for 37 years.