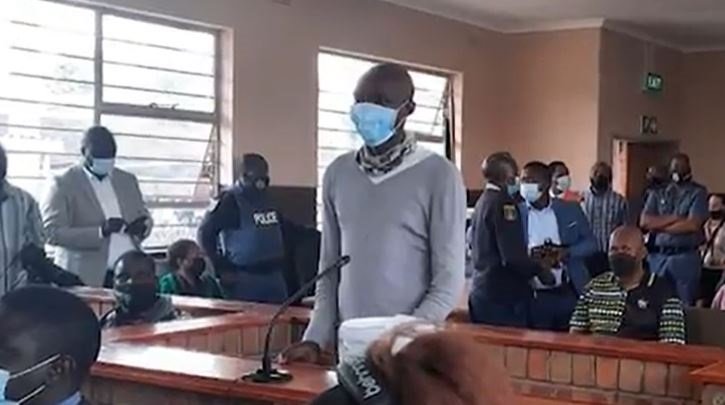 THERE were emotional scenes at the Seshego Magistrate’s Court, outside Polokwane, Limpopo, on Thursday where an alleged serial killer appeared.

For Kenneth Makhura and Takana Chigoyi, the sight of the accused, Zimbabwean Themba Prince Willard Dube, brought back memories of the day they had to view the dismembered bodies of their sisters.

The shackled Dube appeared relaxed as police slowly escorted him to the court.

Police officers had to protect him from angry members of the public who are baying for his blood. The crowd banged on the police vehicle and shouted out that they wanted to dismember him “as he did to the victims”. However, the police managed to control the crowd.

Inside court, Dube did not show any emotions and avoided looking at the public gallery where victims’ family members were seated.

Makhura, whose sister Khomotso, 41, was killed, told News24 that the pain was just too much to bear.

“I felt deep pain seeing him walking into court. However, there is nothing I can do because the law has to take its course. We live in South Africa where there is a rule of law,” Makhura said.

The DNA tests of all the victims have been outstanding for almost two months now. Makhura lamented the delay.

Chigoyi, who lost his sister Chisimango Gumbo, 42, almost broke down when he spoke to News24.

“I just don’t know what to tell my family back in Zimbabwe. This guy caused a lot of mess. You can’t just kill a person, no matter where you come from,” Chigoyi said.

SA Human Rights Commission monitor in Limpopo, Pat Molepo, told the media that the interview he held with the accused revealed that he was assaulted in custody.

“He (the accused) also indicated that he was not given anything to eat since being brought here this morning (Thursday).”

“From a human rights perspective, he still enjoys certain rights, despite his alleged heinous crimes or [being] a foreigner.  The State still has to prove its case,” Molepo said.